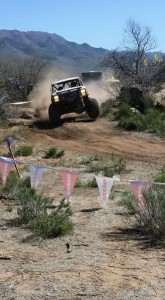 Ricky Bobby baby! We drew second for the starting order today. Right off the bat I started going the wrong way towards the rocks. After finding my bearings we proceeded to chase down Tim Adkins knowing that Matt Salyers was breathing down our neck. It took us a full lap to narrow the gap on Tim. After the first lap we were covered in mud which is unusual for Arizona. There was a wash that was completely full of water that I thoroughly enjoyed soaking Jason Feuilly my co-driver with. Second lap we managed to catch Tim with Matt still close behind. We stayed behind Tim but noticed that one of his shock bolts had broke . By the third lap both his shock bolts were gone. We radioed to his pit to let them know the situation and passed him. Feeling like we were in the clear we slowed down but in the lull saw that Matt was still closing in on us and fast. So we dropped the hammer and took off trying to maintain the gap between us. Passing through the pits Shawn Rants was ready to help but luckily we didn’t need to 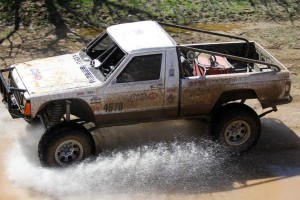 make any stops. Thanks for being there at least Shawn! Continuing on to our last lap we lost track of Matt but found him stopped with electrical issues. Unfortunately there was nothing we could do to help. We proceeded through the finish line and ended up taking first place. After getting back to pits the 4400 race kicked off and we watched for a bit. Only to find John Brock rolled over by the start/finish line. We drove the comanche onto the course and were able to winch him back over using our new JM Rigging winch line. Not an easy task. We had to pull John’s car back over uphill from its lid to all fours and our winch line handled it with no sweat at all.