Previous Next
Briney Motorsports Loses the Battle With the Course At the Dirt Riot Central Series Opener At Canyons Offroad Park In Fredericksburg, TX 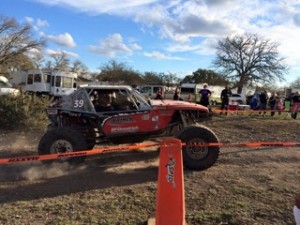 Hays, KS, March 17, 2015 – Billy Briney, driver of the Briney Motorsports #39 car, would find out that no matter how much you prep, there is always the unknowns that can end your race. “After King Of The Hammers, I did a full tear down and checked everything I could on the car” said Billy. But his race would be cut short due to a link mount breaking off the chassis.  “I will tear down and clean up the car and then it will go to Bent & Twisted Fabrication to get fixed where I’m confident that Mike will make the car even stronger for me.” 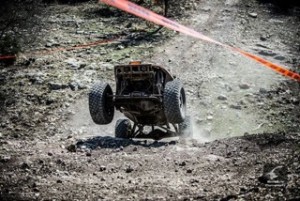 During pre-running on Friday, Billy noticed that the alternator wasn’t charging like it should. With not much time left before qualifying started, he went back to camp to test it. Being the qualifying course was short and he was out of time, Billy decided to change it after qualifying. “As we got in line for qualifying, I noticed that the alternator quit charging completely” says Billy “I decided to shut the car off until the car before us started”. As he waited at the start line, the car in front of him ended up rolling. Not knowing how long the recovery would take and the volts dropping in the battery, Billy had no choice but to shut the car off. When the course was clear the car barely started. Billy would make it through qualifying with a 6th position start.

Billy started the race on Saturday in 6th position and after the first lap was in 2nd place on corrected time. “We were picking them off and having a blast” says Billy “while we were chasing down the car in front of us I noticed my co-driver, Kirk McClure, acting like he was casting a fishing pole.” I said, “What are you doing?” Kirk said “ I’m reeling him in!” and we both laughed.  After 1 ½ laps, Billy’s race would be ended by a broken link mount.

Thank you to all our sponsors: