Huge Race Day!  Thanks to all for an awesome day at todays National Rampage.  Congratulations to all the winners and racers! 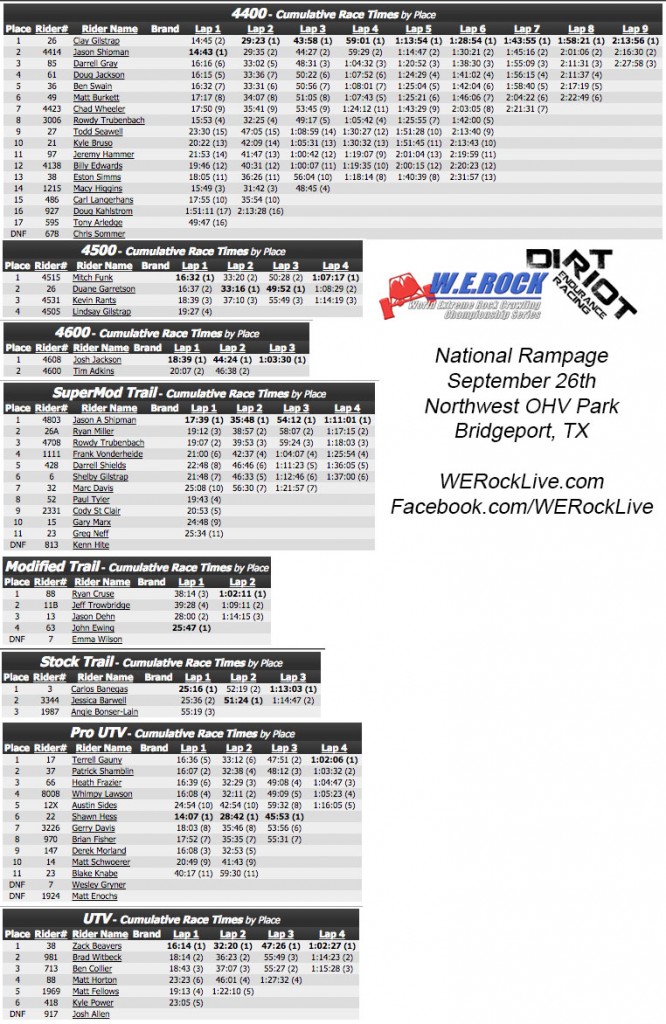 Back at the Bridgeport Texas Northwest OHV Park, we are expecting over 100 drivers to participate in this year’s race. The weekend will kick off at Rock City Burgers on Friday night with a Downtown Meet & Greet with the Series Awards presentation starting at 7pm.  After a full day of racing on Saturday, with multiple classes, there will be an Awards Ceremony presenting National Series Winners and Race Winners.  Will also be a raffle and auction including the banner, with all benefits going to Susan G. Komen 3 day walk supporting Shelley’s goals, and anything above going to the Gwendolyn Strong Foundation, thegsf.org.

BLACKFOOT, ID   SEPTEMBER 23, 2015:  The Baertrax & Tribe 4×4 Dirt Riot National Rampage comes to Bridgeport Texas Northwest OHV Park this weekend for the biggest event of the 14 Dirt Riot races this year. “Drivers have had to qualify to race in this end-of-year spectacular event,” explained Rich Klein, President and founder of W.E. Rock Events. “Our 5 series, composed of 3 races each, have already finished and each series has a winner. This weekend, all the racers from each series come head-to-head and race for the National Title. In addition to a cash purse, the highest placing finisher in the 4400 Pro 4×4 race, who is not already qualified, will get an entry spot into the 2016 Griffin King of the Hammers.”

The weekend will start on Friday with Tech & Registration, Pre-Running and Pro Class Qualifying followed by a Driver Meet & Greet and Series Awards Ceremony at Rock City Burgers from 7pm-8pm. Racing starts Saturday morning at 9am, followed by a full day of on track action until at least 6pm. The awards ceremony will follow immediately after the race. There will be a raffle and auction for the Susan G Komen 3-day walk and Gwendolyn Strong Foundation on Saturday night. More information on times and location can be found at www.werocklive.com/events/dirt-riot-national-rampage-3.

This year’s course is much different from years past. The course will offer the same start and finish area, but much of the track has been changed from previous years as far as direction of travel and added loops and trails. The big bowl where the pits are located has been expanded and graded for more pit areas and easier access. The racers will be travelling through the hot pits in the opposite direction from years past. After racing through a version of the back north-west corner, the race track drops back into the pit bowl for a high speed run to the back of the pit bowl. The start/finish bowl will now see new cross flow of racing for greater spectator viewing opportunities. The main park access road from the front gate to the start/finish line will remain open all day, both days, as the new course doesn’t cross the access road. “We would really like to thank Barco Pump and all the volunteers who have worked with us over the last couple weeks draining the park and helping set up the course so we can have another great race course for the drivers and spectators,” added Klein.

Spectators are encouraged to come and enjoy the day of entertainment on Saturday September 26th. Racing will be on course from 9am to 6pm, with awards immediately following. Admission is $15 for adults, $5 for ages 8-15, children 7 and under free, Military with ID $5 off. There are vendors, food and amenities on site, and we encourage you to bring chairs and shade structures. For additional details go to www.werocklive.com/events/dirt-riot-national-rampage-3.

After the event we will have the results, pictures and stories posted at www.werocklive.com/2015/dirt-riot-2015-national-rampage. 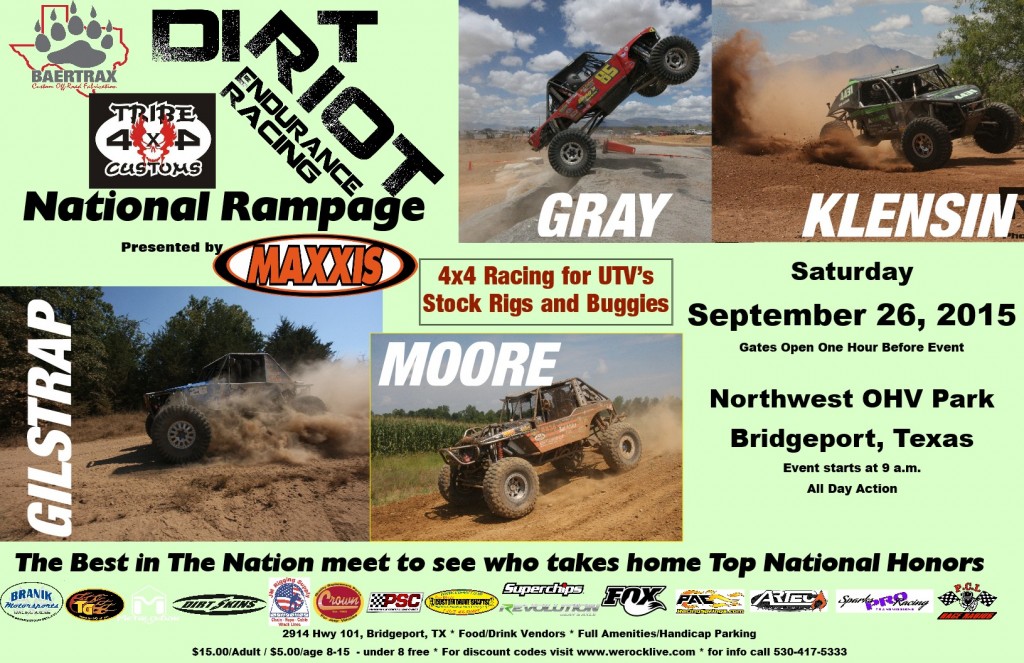