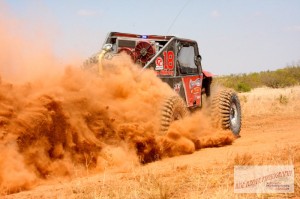 The day started with 21 cars taking to the motocross track for qualifying.  A few chose to start at the back of the pack for the race rather than risk hurting something in qualifying.  After one practice lap and one hot lap, the top five qualifying times were Loren Healy, Levi Shirley, Brian Shirley, Clay Gilstrap and Chris Hoyt.

All teams were given some time to make adjustments, then they lined up at the start of the track to begin, 30 seconds apart they came off the line.  The first lap saw some immediate lead changes, Levi and Brian Shirley both passed Loren Healy as he got in to the fence on the back side.  Three cars, Todd Wooten, Todd Seawell and Derek West broke on the first lap. 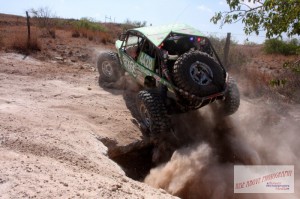 Second lap brought in Brian Shirley followed by Loren Healy, Levi Shirley, Clay Gilstrap, Chris Hoyt and Adam Carter all came in within seconds of each other.

By lap 3, Brian Shirley had established his lead and held on to it through the finish.  The most consistent lap times coming in at just over 19 minutes each lap.  Brian won the race by over 14 minutes.

Levi Shirley delivered the fasted lap of the day at 17.22 near the end of the race.

Top three were only drivers on the lead lap – finishing 10 laps each. 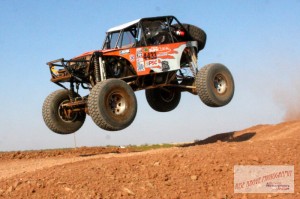 Joey Archuleta finished 4th with 8 laps, consistently ran in 4th throughout the day, finished a lap early due to transmission problems, had solidified his position without running the white flag lap.

Chris Hoyt from Colorado finished fifth, and also had the strongest fan base at the race and online.  Tony Arledge finished eight laps to finish 6th followed by Clay Gilstrap (brother of Rock Crawler Shelby Gilstrap) in the only single seater on the course.  Eighth was by rock-crawler Kyle Bruso in the new #21 competing in his first race.

Ninth was #25 Sean Johnson and finishing the top 10 was Shawn Inman. 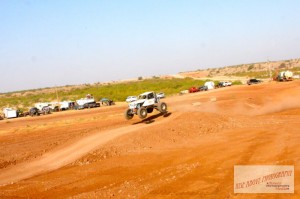 In the trail class, six cars came out to compete in the two classes.  Frank Etier came out on top in the Modified Trail class over Chris Sommer and Matt Allen with three laps in their one hour time limit.

Rock crawler, Duane Garretson, from Come Get Ya Some, came out the winner in the Stock Trail class in the #26 followed by active duty marines Adam Arsenault and Scott Siska in the #762.  Shea Nutt driving the #603 “Boobie Car” finished third, taking home her first trophy.

In the UTV, two team members, Doug McDowell and Weldon Nutt competed head to head with Nutt coming out on top.

Video Compliments of See You On The Trail 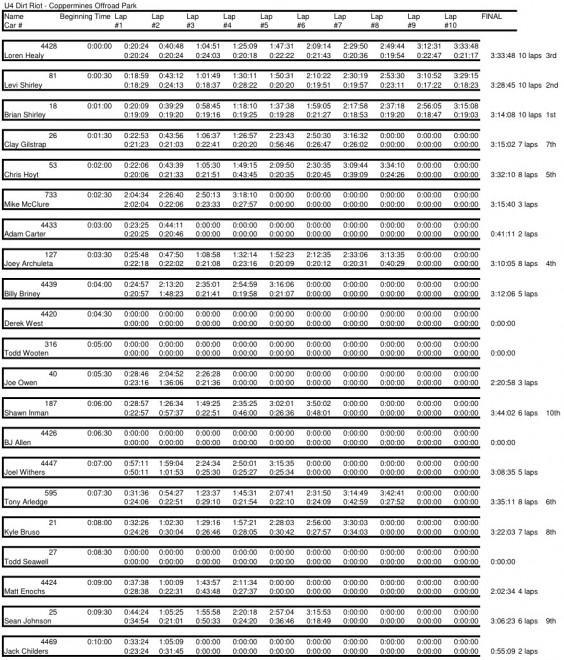 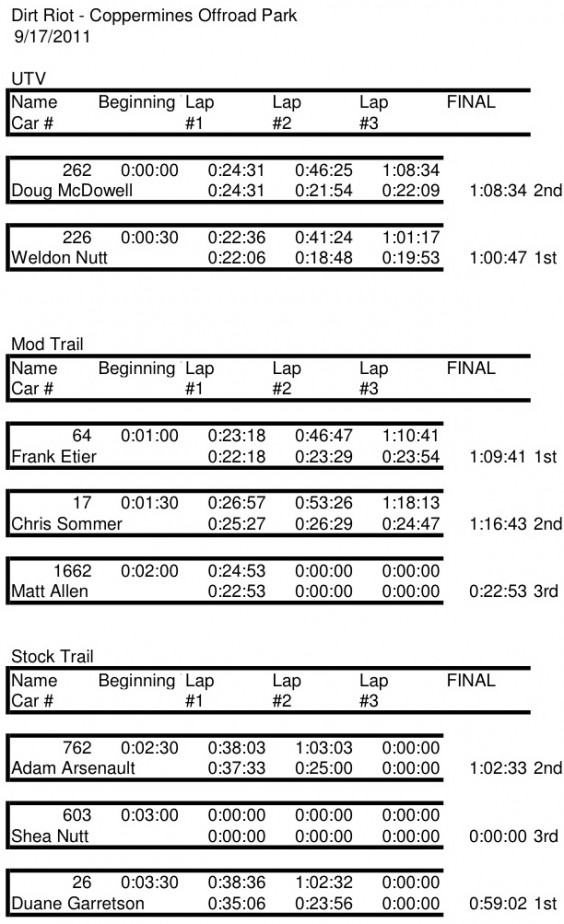 The Coppermine OHV Park Dirt Riot Race had 21 U4’s that took the start line at 10am.  The race is going great!

Here are some updates from the field: