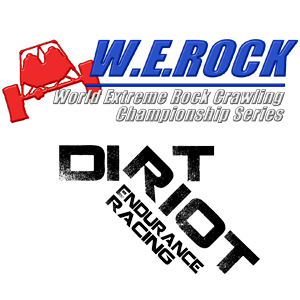 BLACKFOOT, ID   APRIL 7, 2015: The W.E. Rock Events / Dirt Riot event at AreaBFE in Moab, UT ended mid-race when a spectator was tragically struck. The San Juan County Sheriff’s Office has declared it an accident. With the families blessing, the weekends racing results are being posted and the race series will continue onto its next stop in West Virginia. “We are heart broken over the entire situation. Our thoughts and prayers are with the family, the driver, co-driver and all the first responders that were on site to help. We appreciate everyone’s immediate response and how the entire W.E. Rock and Dirt Riot family has pulled together to support each other,” explained Rich Klein, President and founder of W.E. Rock Events.

Christopher Hower’s memorial will be Monday April 13th at 1pm at the Western Montana Veterans Cemetery in Missoula, Montana with a Celebration of Life party immediately following at Prince of Peach Lutheran Church. The family has requested a Jeep presence, if you are in the local area and would like to attend.   In lieu of flowers or cards, the family is asking the you consider making contributions to Christopher Hower’s GoFundMe trust account set up to support his two children, Elijah-9 and Kalli-6. www.gofundme.com/8ctk1w

Chris Hower’s family understands his love for the Jeeping community and has communicated multiple messages through Charlene Bower including from his Mom to the Driver, “Chris would want him to understand it was an accident and not let this affect him. Chis would not want him to stop what he is doing and stop racing. He loved his jeeping and knows what it means to all jeepers.”   When talking with his Sister about the upcoming races, she said, “We understand that the show must go on. Chris wouldn’t want it to stop on his account. If you would be so kind to have a quick moment of silence, we would appreciate that.”

The jeeping and racing community has pulled together in multiple arenas, and will continue to. Chris was in Moab by himself camping with a Jeep and trailer. San Juan County Sergeant Joe Harris and his team have gone above and beyond the call of duty to get his Jeep and trailer secured. Moab 4×4 Outpost took time to make sure that it was travel safe, David & Misty Adams and the Red Rock 4-Wheelers pooled gas money together for the journey home, and Al & Shirley Lockett of the Reno Off-Road Expo and Pet Show are driving the Jeep and trailer back to his home in Ely, NV. They will also offer assistance with finding homes for his two lab dogs.   T&T Customs in Wyoming is helping head up the Jeep presence at the memorial services. Bower Media Charlene Bower has been in contact with all parties heading the central communications. “We have been releasing facts since the moment of the incident. It does no one any good to have rumors and mis-information floating around. We hope that the above mentioned information helps continue this goal,” said Charlene Bower.

Race results have been released. The morning races were complete. The Pro 4400 4×4 class results have been determined as such: The check point from the bottom section was used to establish the finishing order for those that did not get to run on top. The timing shown is based on the split from the last person through the start/finish line. Those that only completed two of the three laps on the bottom section are then listed in order with false times recorded to show them on the results in the proper order of finish. Payouts, trophies and points will be awarded as such.

The race including the SuperMod class and 4500 class that didn’t have an opportunity to start, the series and national points will be awarded as such: SuperMod Class, 14 drivers, if all points were awarded, the average would have been 195, which all drivers will receive. Pro 4500 4×4 Class, 2 drivers prepared to start the race, both were awarded 200 points. The third driver had declared himself unable to start and was awarded DNS points.

The full set of 2015 series and national points will be released after the completion of the Chaos Offroad race in Capon Bridge, West Virginia. 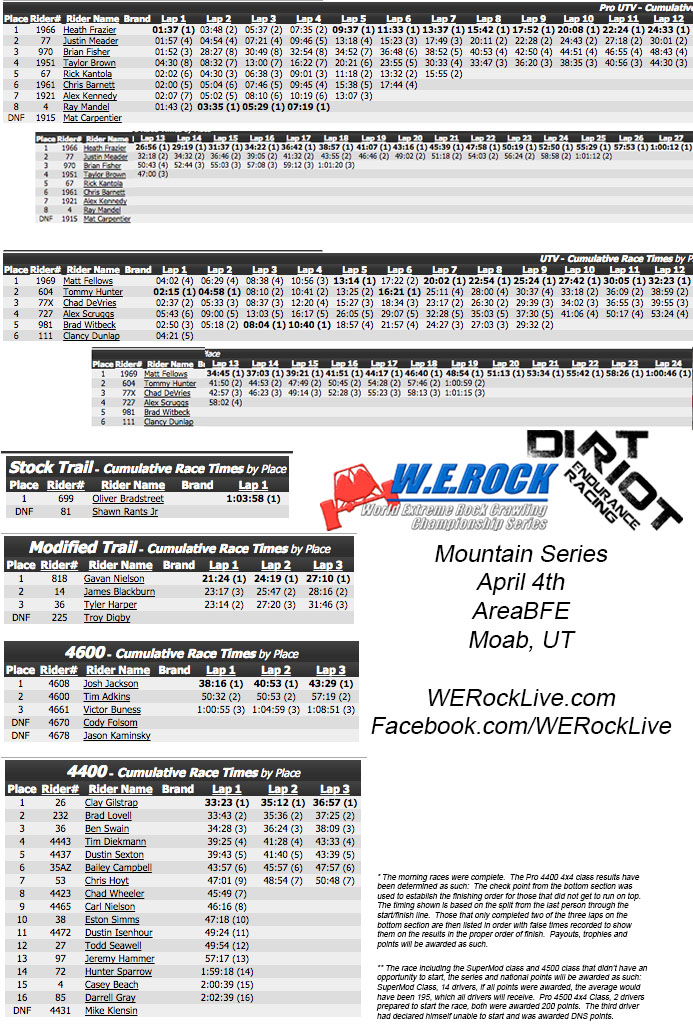 The racing has started!  Pro Qualifying today was dusty and warm, leaving tomorrow for an interesting day of passing.

We are Kicking off the Mountain Series in Moab!

Spectator Tickets: CLICK HERE
(Credit Cards will NOT be accepted at the gate.  Please purchase online or bring cash. Thank you.)
These are rain or shine events, no refunds.

BLACKFOOT, ID   MARCH 30, 2015: Now a common end to the Moab Easter Jeep Week, Dirt Riot is back at AreaBFE for the fourth year. Dirt Riot adds a racing flavor to the trail-riding week. Pro 4400 4×4 racers, trail rig class and UTV classes race a course that is spectator friendly and fun to watch. Or, if you want to race, there is a run-what-you-brung+safety class to compete in! Racing starts at 9am and will finish around 4pm with an awards ceremony.

“The trail system, and race format, will be the same as in years past, except for having two heats of the Pro 4400 4×4 class with time between races for them to work on the cars,” explained Rich Klein, President and founder of W.E. Rock Events. “We are excited to be at AreaBFE again this year and watching this event grow. We are proud to be the largest single day fundraiser for AreaBFE and hope that you will come support by enjoying this perfect Moab weather on the rocks with lots of exciting racing going by!” 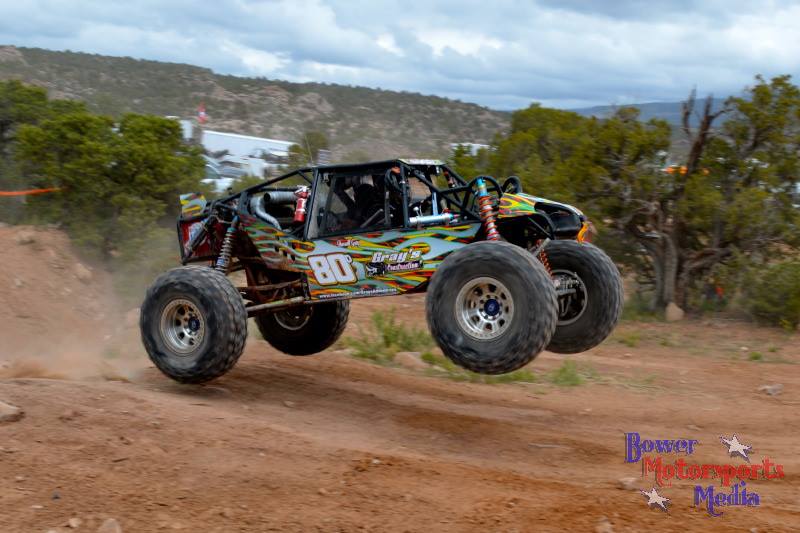 Admission is $15 for adults, $5 for ages 8-15, children 7 and under free and Military with ID get $5 off. Order your tickets now: http://conta.cc/1B3hock There is little to no internet service at the event, if you would like to use a credit card, please purchase tickets online and download your receipt.

There are vendors, food and amenities on site. We encourage you to bring chairs and shade structures. There is camping available onsite. For additional details go to http://www.werocklive.com/events/dirt-riot-mountain-round-1-3 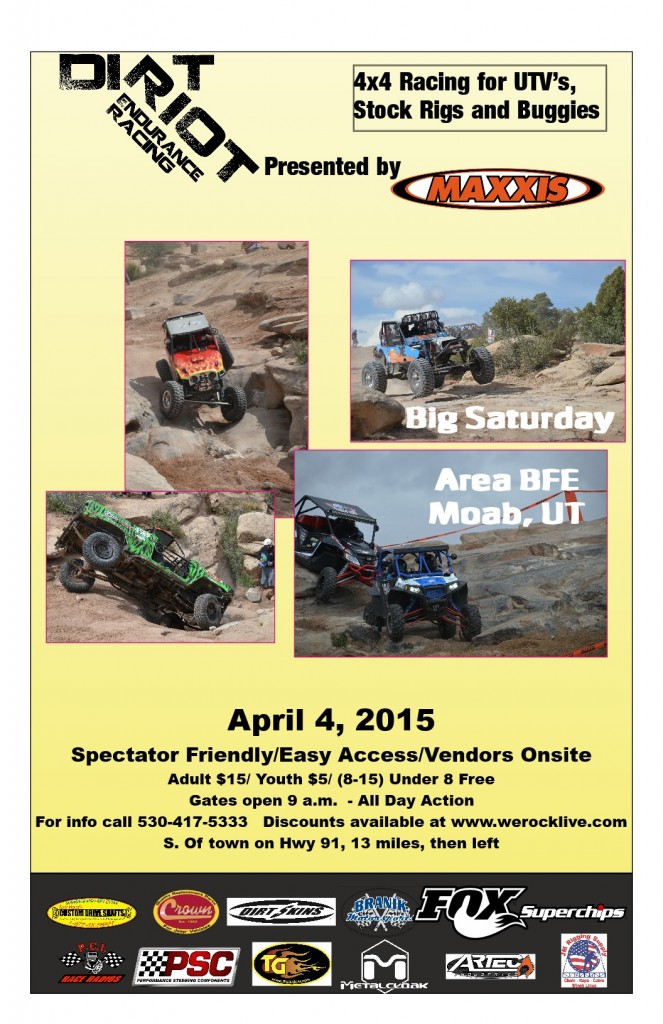 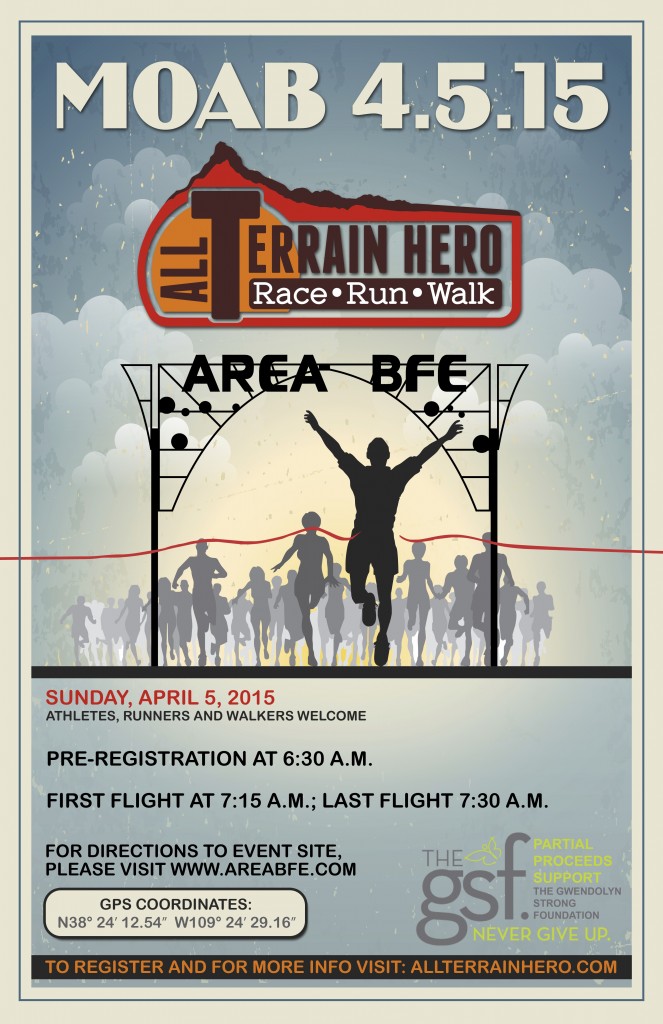