A spectacular day today!  The sun was shining and the races were great!

Dive deeper into the times at http://www.moto-tally.com/WERock/DR/Results.aspx 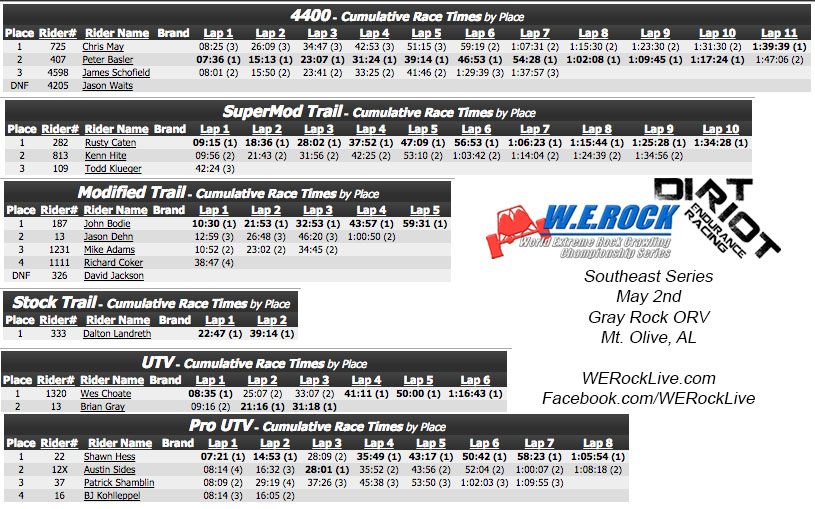 The Southeast 2nd Round of Dirt Riot races are about ready to start! 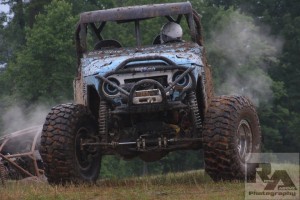 The second round of Dirt Riot series races start this weekend at Gray Rock ORV’s Southeast Series race. Racing will start at 9am on Saturday May 2nd with Pro Class qualifying, followed by multiple classes of racing until approximately 4:30pm when the top 3 drivers in each class will be awarded trophies and cash winnings. The winners of each race is determined by the most number of laps completed in a set amount of time.

“The weather looks to be outstanding this weekend! The racecourse is nearly the same as last year, except that we are running it backwards from previous years. The mud holes that have hampered the race in the past are much drier and two more days of dry air will make them even better. The big rock downhill will not be used this year as it would be a race-stopping up hill climb,” said Rich Klein, President and founder of W.E. Rock Events. “We are really looking forward to a great race this weekend and continuing the Southeastern Series.” 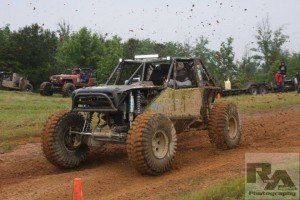 The 2015 series points have been released after the completion of the first round of all five series. Gilstrap Motorsports Clay Gilstrap is currently sitting first in the Pro 4400 4×4 class national points with Molton Motorsports Tim Diekmann in second and Fly-N-Hi Racing Jeremy Hammer in third. Pro 4500 4×4 class leaders include Funk-n-Fast Mitch Funk, Come Get Ya Some Motorsports Duane Garretson, and Broadsword Racing Adam Arsenault. In the Pro 4600 4×4 class Tim Adkins is in first, F&F Racing Cody Folsom in second, and Josh Jackson third in national points. Super Mod Trail class national leaders include Dom Vallejos, Kenn Hite in second and Ryan Miller in third. Mod Trail class has a four-way tie for the lead including Emma Wilson, Gavan Nielson, Kyle Steele and Richard Coker. Stock Trial Class is similarly with Carlos Banegas and Oliver Bradstreet tied for first with Shawn Rants Jr in third.   The Pro UTV class leader after round 1 is H&I Frazier Enterprises Heath Frazier followed by Justin Meader and Braun Racing. The non-pro UTV class leader is Brad Witbeck with Ben Collier and Matt Fellows tied for second. The complete list of series and national points can be found at http://www.werocklive.com/2015/2015-dirt-riot-points-standing.

Admission is $25 for adults which includes a weekend of wheeling and a day of spectating the race. A classic tradition at Grayrock begins at dusk, with a band and jam session in the pavilion. Tickets will be available at the gate via Grayrock ORV. There are vendors, food and amenities on site. We encourage you to bring chairs and shade structures. There is camping available onsite. For additional details go to http://www.werocklive.com/events/dirt-riot-southeast-round-2-3.

After the event we will have the results, pictures and stories posted at http://www.werocklive.com/2015/dirt-riot-southeast-round-2-gray-rock-orv-al. 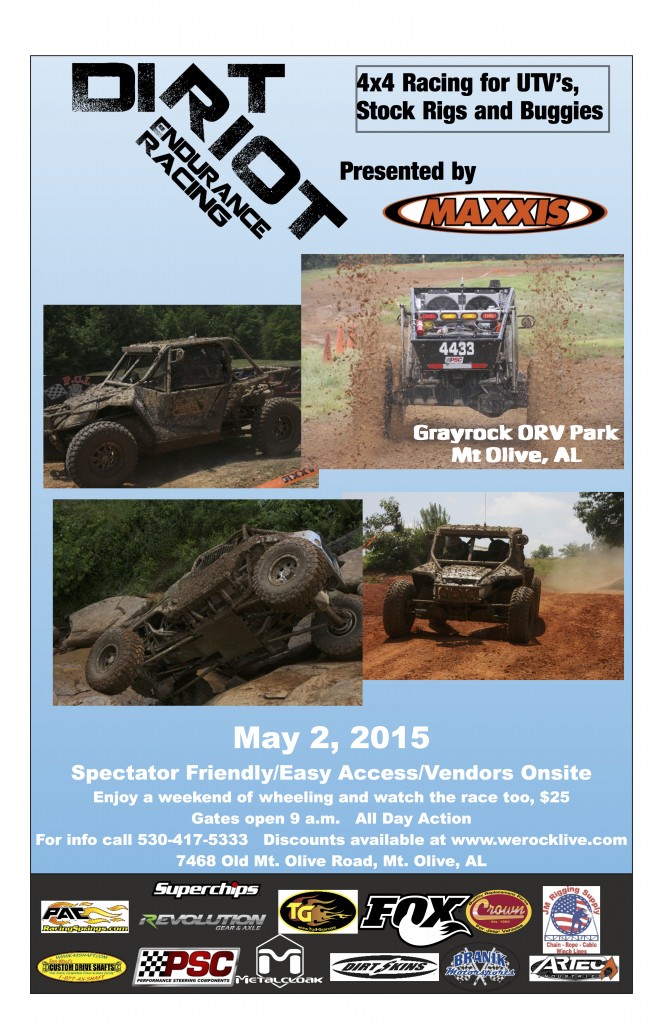