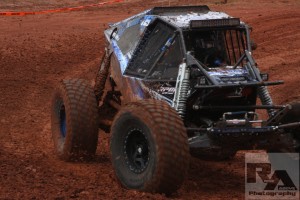 Dirt Riot Southeast Series started out as a bit of a muddy mess at Durhamtown Plantation in Union Point, Georgia.  With professional and first class sportsman drivers joining in on the fun, the weather held until just ten minutes after the awards ceremony, but not without flinging Georgia red clay on everything in its path first.  Bluetorch Fab James Schofield earned the Pro 4400 4×4 class win.  “The Georgia clay really gave the drivers a run for their money, and their winches, but all came out of the woods with a smile and a great story,” said Rich Klein, President and founder of W.E. Rock Events. “On a different topic, the new timing system that we are using, Moto-Tally software, survived the weather in yet another test of its durability and applicability in our style of racing.” 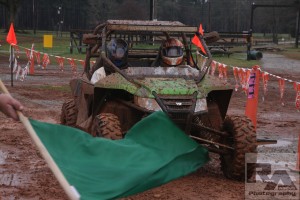 The UTV race started the Dirt Riot day with five competitors running for bragging rights, Team Chaos Brian Gray came out on top in his new Artic Cat with newcomers Johnny Shealy and Chip Brockwell slugging it out for the next two positions. Johnny had been a spectator at the 2013 event at the Plantation, and thought he’d try his hand this year.  He did well in his RZR900; his wife wouldn’t let him race her RZR1000. Winners for the UTV class in order are: First place Team Chaos Brian Gray, 2nd place Johnny Shealy, 3rd place Chip Brockwell, 4th place Mike Brown, and Dan Hunt coming in 5th place. 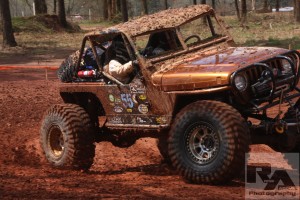 The mid-day race was a challenge for all; the trails were more than most of the various trail style rigs could handle. Winching became the order of the day to get up the steep hill at the back of the course. Kevin Crocker, who won the Dirt Riot Central Round 1 Hidden Falls 4600 class two weeks prior, made the trek to Houston to take on the terrain. While he won his class and completed his laps, his tires are expected to be replaced before the next event!  Redlyner Racing Jay Callaway in the mall crawler 4550 took home another win in the Pro 4500 Class. 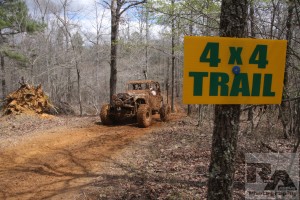 The last race of the day featured some good horsepower and a lot of flinging mud.  By the time this race got the green flag, the top track had dried out some, but several had made modifications to protect sensitive areas of their rigs from the intrusive track.  James Schofield in the Blue Torch Fab Black Widow took home honors in the 4400 class with Todd Klueger in second. 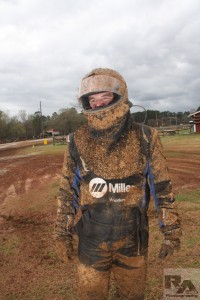 The event results, pictures and stories have been posted at http://www.werocklive.com/2014/dirt-riot-southeastern-round-1-durhamtown-plantation

A bit of a muddy mess, here are the Results. 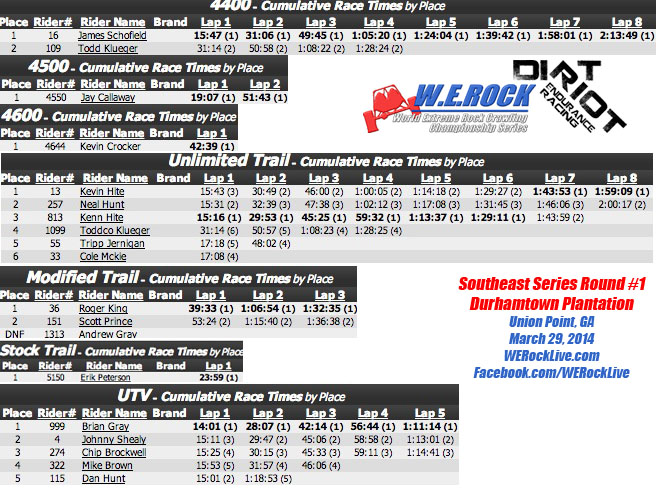 See All the Results in multiple different formats here: http://www.moto-tally.com/WERock/DR/Results.aspx 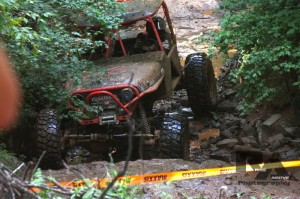 BLACKFOOT, ID   MARCH 10, 2014:  The Dirt Riot Southeast Series will start its’ second season at Durhamtown Plantation in Union Point Georgia with professional and sportsman drivers joining in on the horsepower of fun.  Racing starts at 9am and will go until at least 3pm with awards immediately following. “Opening up this Southeast series was a great idea.  This will be the second year that we have brought the Dirt Riot series to the Southeast region and we are excited to see the growth of drivers,” said Rich Klein, President and founder of W.E. Rock Events.  “We know of a number of new cars that have been built and drivers that will be coming out to join the Dirt Riot family for their first event.”

Local UTV and 4×4 Sportsman drivers are encouraged to join in on the racing fun. With only some simple safety requirements, anyone is able to come and race! 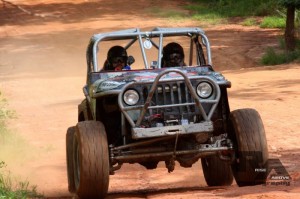 The racecourse will be almost the same as last years; approximately 5 miles of varying racing terrain.  The racecourse starts with a high speed run into an area with three big motocross-style jumps or rollers.  The course continues out into a GP/Crandon style track.  Next it goes off into a big red dirt bowl with steep sides, which you climb out into the woods.  High-speed road sections lead to some technical twisty turns and then into a rock creek bed for the Pro Classes; the UTVs and Sportsman classes will bypass the creek bed.  The course continues to moderate speed areas that have been widened into more technical roads, and then out to a run alongside the main paved road before coming back to the start / finish line. It will be easy enough for UTV’s and Stock 4×4 participants to have fun, but tough enough for the Pro 4400 cars to be challenged. The winners of each class are determined by the most number of laps completed in the set amount of time. 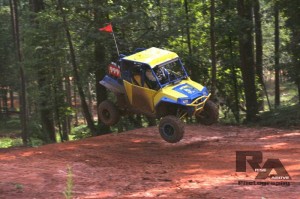 Spectators are encouraged to come and enjoy the day of entertainment on Saturday March 29th.  Admission is $15 for adults, $5 for ages 8-15, children 7 and under free and Military with ID get $5 off. There are vendors, food and amenities on site, and we encourage you to bring chairs and shade structures.  For additional details go to http://www.werocklive.com/2014/dirt-riot-southeastern-round-1-durhamtown-plantation.

There are three Professional 4×4 classes, a Trail/Sportsman 4×4 class and a UTV class.  The classes are built to encourage local 4×4 or UTV participants to join us in a day of fun racing.  For fees and payout information go to http://www.werocklive.com/2014-fees-payout.  Dirt Riot is an Endurance Racing series that is composed of five series of three races that stretch across the country.

After the event we will have the results, pictures and stories posted at http://www.werocklive.com/2014/dirt-riot-southeastern-round-1-durhamtown-plantation. 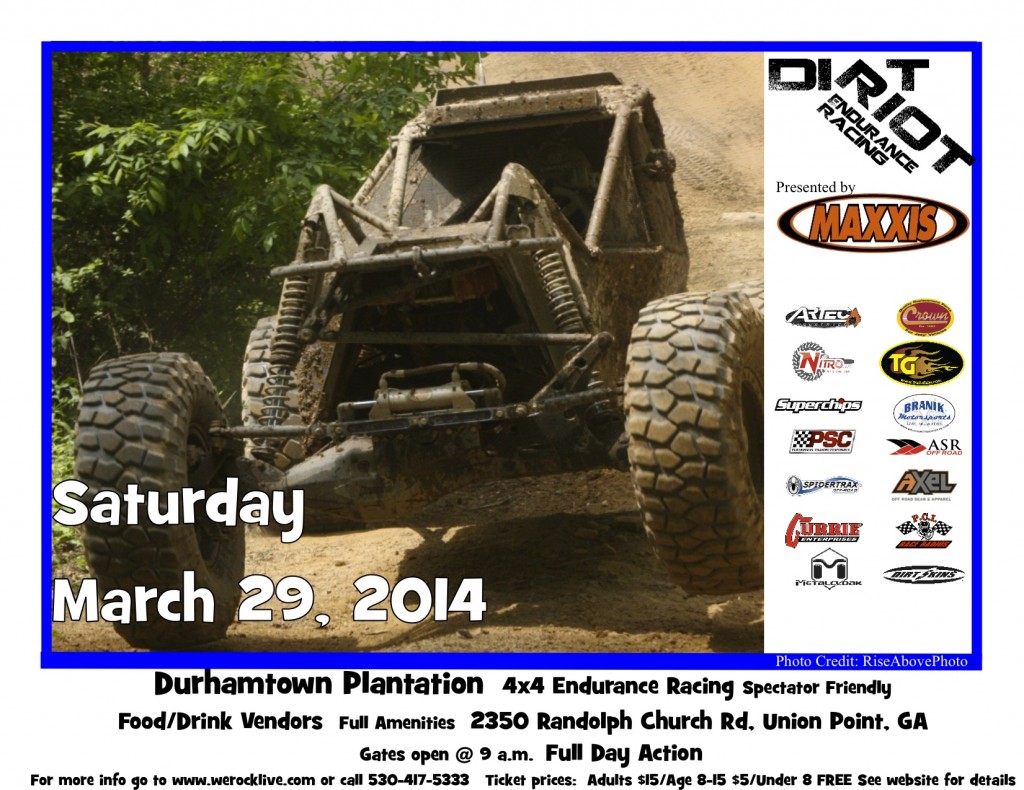