2015 Kickoff to W.E. Rock Rock Crawling and Dirt Riot Endurance Racing Has Spectators on Their Toes Both Days 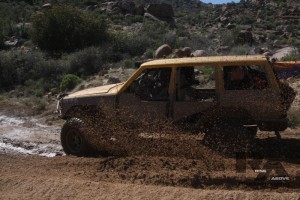 The Arizona desert is the perfect place for an early spring event, and it proved to be a nail-biting, action packed, two days worth of competition with the Trail-Gear Western W.E. Rock Championship Rock Crawling on Saturday and the Dirt Riot Endurance Series race on Sunday. The weekend at Thompson’s Ranch in Congress, AZ, a short hour from Phoenix, was sponsored by Jones Ford and Fly-N-Hi Offroad. Not only was there action on the course, but also had a very busy vendor row including JM Rigging, the Sickline, KC Hilites, Trail-Gear, Jones Ford, MetalCloak, Artec Industries displaying alongside ADS Shocks providing race support and the W.E. Rock General Store.

“We can’t thank the crowd enough for coming out and letting the drivers put on a spectacular show for you all,” said Rich Klein, President and founder of W.E. Rock Events. “From nose-wheelies to roll-overs, we love being able to bring this type of racing to venues across the country.”

To read all about Saturday’s Rock Crawl – CLICK HERE 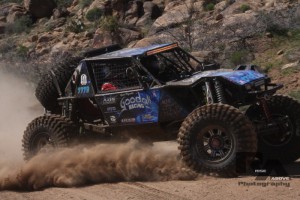 Sunday seemed to dawn early after a full day of rockcrawling, but the Dirt Riot competitors were ready to go at 8 a.m. for their driver’s meeting. Qualifying for all pro classes started at nine, Pole Positions were taken by Mike Klensin, 4400; Mitch Funk, 4500; and Justin Meader, Pro UTV. The 4600 class opted out of qualifying.

First race of the day was the UTV’s. There are now two classes, the Pro class and the Sportsman class. Justin Meader took home the honors in the Pro class, Brad Witbeck won the Sportsman class. Frank Minice was the second place finisher in the Pro class and had everyone in tears at the awards ceremony as he honored his co-driver, Jason Swigart, who passed away last September and is one of the core reasons for the ‘Live with It – Harness and Helmets’ campaign W.E. Rock & Dirt Riot support. The finishing order for the Pro Class was Justin Meader, Frank Minice and Taylor Brown. In the UTV Class, Brad Witbeck won with Logan Goodall taking second, Trevor Crane in third and Nathan Unruh in fourth. 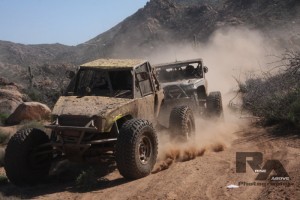 The 4600 and Mod Trail took the course together for the next hour; all the Mod Trail cars were Toyota’s, Kyle Steele, in his first race, won that class with Larry Karver in second and Aaron Armstrong in third. The 4600 class was won by F&F Racing Cody Folsom in the Comanche, followed by Tim Adkins in second and LetzRoll Offroad Matt Salyers in third.

Big Rich moved the big boys up to the next race for two hours, it was a test of skill and endurance for all. Mike Klensin and John Schaffer were trading leads in the first few laps, both physically and on corrected time, until Mike broke on the rock pile coming out of the start/finish line. The recovery crew was speedy getting things moving again, in less than three minutes, but the effect was bunching up the leaders for a practical re-start. At the end of the day, Kenneth Goodall took home the win, his first; followed by Jeremy Hammer and Team 602 Airen Patrick. The difference between second and third was a mere 25 seconds. John Schaffer placed fourth, Todd McCullen in fifth, Beau Mathews in sixth, Kyle Roach in seventh, Mike Klensin in eighth and Alan Johnson DNF’d unable to finish a lap. 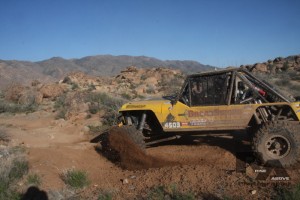 The SuperMod class took the field with the 4500 class for the last race of the day. With nine competitors in SuperMod, it was looking to be an exciting race. A little bumping on the track, together with the water in the washes, took two cars out early, right in the same location. The teams of Kroger and McGhie walked back to the pits together. After an hour of racing, Dom Vallejos took the win, followed by Ryan Miller and Jones Auto/Select Glass Racing Jayson Mitchell. The rest of the field finished in the following order: Paul Tyler, Joe Whitcomb, Carlos Gonzales, Chris Langen, Christie Kroger and Rawlin McGhie.

The 4500 class became a class of attrition; Funk-N-Fast Racing Mitch Funk had the early lead until his steering broke at the same spot that had taken the leader of the 4400 race out earlier in the day. The final winner was Adam Arsenault, followed by Sparks Pro Racing Julie Sparks and Mitch Funk in third. Joey Simeone would place fourth and Nefarious Kustoms Cameron Chin in fifth.

Both days ended with the awards ceremony where hundreds of dollars were distributed to winners along with classy trophies made by Artec Industries. 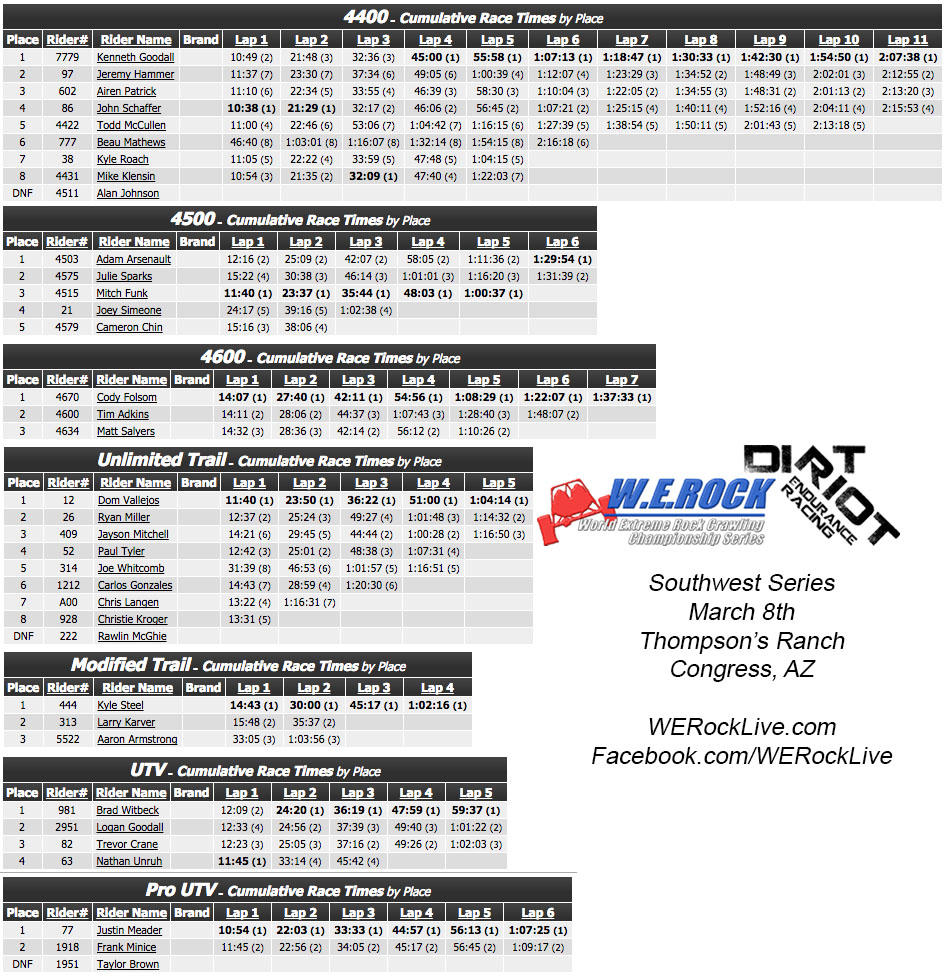 If you are interested in a full weekend of racing, W.E. Rock Crawling will be on Saturday – the 15th year in competition!  More Information on that event HERE. 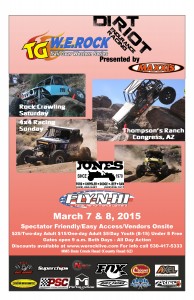 Starting the 15th season of Professional Rock Crawling, Trail-Gear W.E. Rock Western Series Round 1 begins at Thompson’s Ranch in Congress, Arizona for a one day spring event Saturday March 7th. On Sunday March 8th, the Dirt Riot Endurance Racing series kicks off the 14 event series in the beautiful Arizona desert. Jones Ford and Fly-N-Hi Offroad are sponsoring the weekend of off road action. Both events are spectator and family friendly with vendors and food available, small cars will be fine on the 5-mile dirt road to the event entrance. Vendor row will be busy with Artec Industries, JM Rigging, Jones Ford, the Sickline, Durable Metals and MetalCloak displaying alongside the W.E. Rock General Store.

“The rock terrain in Arizona gives us a perfect platform to build some of the hardest rock crawling courses in the US,” said Rich Klein, President and founder of W.E. Rock Events. “Then on Sunday we are having the Dirt Riot race that will put speed on the track. Of course we welcome local UTV’s and Trail Class drivers to come and race, everyone is welcome!”

The Trail-Gear Professional Rock Crawling Series presented by Maxxis will start at 9am on Saturday March 7th. The Professional Unlimited Class will have many of the well-known names in the rock crawling world including Team Rock Hard Justin Hall, 360 Racing Justin Keilman, Unruh Racing Jerry Unruh, Rick Deremo, Trail-Gear Matt Messer and his daughter Team Trail-Gear Olivia Messer among others not yet pre-registered.

The Pro Modified Class will also be packed with stiff competition from across the western United States and welcomes new competitors Rushin’ Racing 76 Denis Volkov and 223 Rad Racing Kevin Reimer among others. Also competing is Team Four Corners 4×4 Jason Kaminsky.

The Sportsman Class is open to any offroad enthusiast in the area that would like to compete. There are minimal safety requirements to take on the courses. You can join the already registered Chris Nazarewicz, Vincent Massi and 602 Racing Charlie Vacha among many others.

Dirt Riot Racing picks up the speed and puts race buggies, 4×4 trail jeeps, and UTVs on a track to complete as many laps as they can within their groups set amount of time on Sunday March 8th. The course is 4.5 miles of rocks, technical and fast sections. Pre-registered in the pro 4400 4×4 King of the Hammers class include Goodall Racing Kenneth Goodall, Fly-N-Hi Racing Jeremy Hammer, LetzRoll Offroad Racing Alan Johnson, ColeCar Motorsports Mike Klensin, 777 Rocking J Offroad Beau Mathews among others not already pre-registered.

Both days’ events have classes that are built to encourage local 4×4 or UTV participants to join in a day of fun competition and racing. For registration information go to www.werocklive.com.  W.E. Rock is a Professional Rock Crawling series composed of 2 series of 3 events each that crisscross the country. Dirt Riot is an Endurance Racing series that is composed of 5 series of 3 races each that stretch across the country.

Spectators are encouraged to come and enjoy the day of entertainment on Saturday March 7th with Rock Crawling starting at 9am, and the final shootout expected to begin about 5pm. On Sunday March 8th, qualifying for the 4400 professional group starts at 9am followed by racing all day. The professional 4400 4×4 is scheduled to start at 2pm for three hours with a grand prix finish at approximately 5pm. All times are subject to change. The winners of each class are determined by the most number of laps completed in the set amount of time. The awards ceremony immediately follows the final race.

Admission is $25 for a two day pass, $15 for adults, $5 for ages 8-15, children 7 and under free and Military with ID get $5 off. There are vendors, food and amenities on site, and we encourage you to bring chairs and shade structures. There is camping available onsite. For additional details go to www.werocklive.com/events/w-e-rock-western-series-round-1 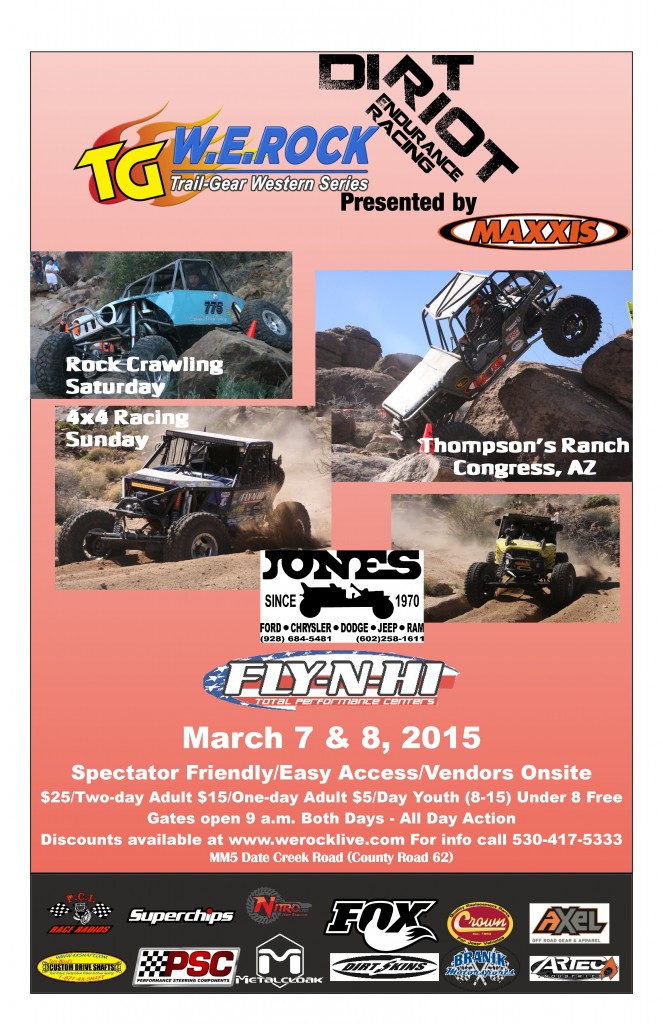