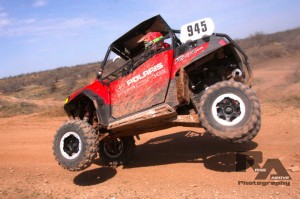 PLACERVILLE, CA   APRIL 29, 2013:  The largest class of Dirt Riot UTV racers, to date, hit the course on Saturday April 13th at the Coppermines Offroad Park for the second round of the Dirt Riot Central Series.  There were 26 UTV’s on course, but that certainly didn’t take away from the Pro 4400 class where the top 3 all completed 13 laps within seconds of each other for the entire race.  “The Coppermines Park always has so much to offer the racers and spectators that we love to come back here every year, ” said Rich Klein, President and founder of W.E. Rock Events.  “We were excited to see such a great turn out in the UTV class.  We have always had this class as an option, with an easy entry fee and safety requirements, and I am glad that it is really starting to take off.” 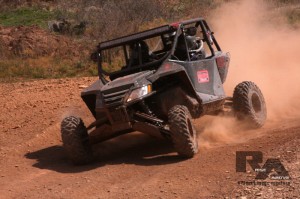 26 UTV’s took the start; in the end, Wesley Gryner would come from starting 25th to taking the overall win, his second win in the Dirt Riot Central Series.  Only one minute separated him from Levi Shirley in second place and Brian Shirley in third place over the course of an hour.  Jason Baird started first off the line and managed to hold on to a fourth place finish, having never seen the leaders, only corrected time told the story.  Of the 26 who began the race, only five didn’t see the checker, a pretty remarkable task for a tough course.  See the full list of drivers results and split times at http://www.werocklive.com/2013/dirt-riot-central-2-coppermines-ok 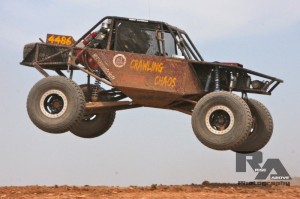 In the 4400 class, the race was very exciting and wasn’t over until the three hour mark on the last and final lap, where Clay Gilstrap would take the overall win.  Spencer Murphy who started 7th after qualifying had made strides over the course of the day to be in contention for first by lap three.  Corrected time again played a factor, by lap 4, Spencer was leading – it was truly too close to call amongst the top four racers:  Levi Shirley, Brian Shirley, Clay Gilstrap and Spencer Murphy.  Each lap remained the same, only seconds separating the top four.  By lap 6, Levi was out of contention; the other three remained as close as before, changing leads by mere seconds.  At the start of the last lap, Clay Gilstrap was behind Spencer Murphy by 26 seconds.  As Clay emerged out of the dust first, having completed most of the seven mile horseshoe course, the crowd and teams held their breath, if Spencer came out of the dust within two and a half minutes, he was likely to win.  The seconds 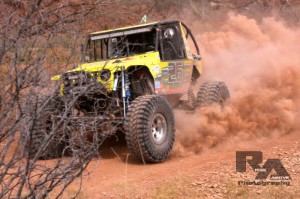 ticked by, two minutes, then three, Spencer didn’t emerge until almost six minutes after Clay, he had a mechanical issue in the waning minutes of the race that cost him the win.  The win went to Clay Gilstrap, his first, on the eve of his 30th birthday.  Spencer Murphy would hold on to second, followed by Brian Shirley, Doug Kahlstrom, Carl Langerhans, Tony Arledge, Shawn Inman and Todd Wooten.  Aaron Peters in his first outing with a new car wouldn’t take the checker this go round. 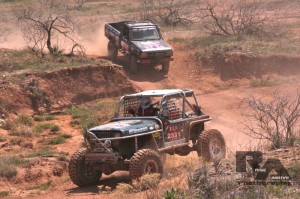 with Mikey Longone not far behind in second.  Cody St Clair and Jason Davis didn’t take the checker flag, but got third and fourth respectively.  In the Mod Trail Class, Justin Lawson took first, with Shelby Gilstrap taking second and Emma Wilson taking third.  Brandon Cox and Darrell Gray would take fourth and fifth respectively with Duane Garretson not able to complete a lap taking a DNF for this race.

In Dirt Riot there are 3 Professional 4×4 classes, a Trail/Sportsman 4×4 class and a UTV class.  The classes are built to encourage local 4×4 or UTV participants to join the Pro Classes in a day of fun racing.  For registration information go to http://www.werocklive.com/2013-fees-payout.  Dirt Riot is an Endurance Racing series that is composed of 4 series of 3 races that stretch across the country. 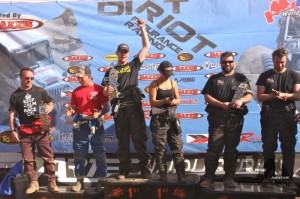 There are more photos, results, videos and more posted at http://www.werocklive.com/2013/dirt-riot-central-2-coppermines-ok/

The next, and final, Central Series Race will be June 1st at Canyons Off Road Park outside Fredericksburg Texas.  More information at http://www.werocklive.com/events/dirt-riot-central-round-3/

The next Dirt Riot Race is the Southwest Round 2 next weekend in Cedar City at the Three Peaks Recreation Area.  More information at http://www.werocklive.com/events/dirt-riot-southwest-round-2/

Photos compliments of Shea Nutt – Racin’ for the Cure! 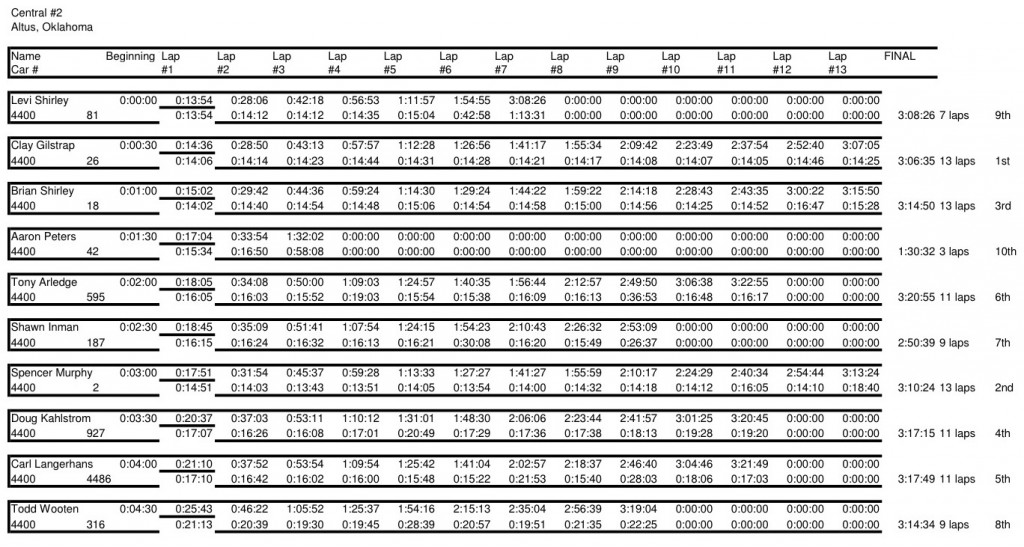 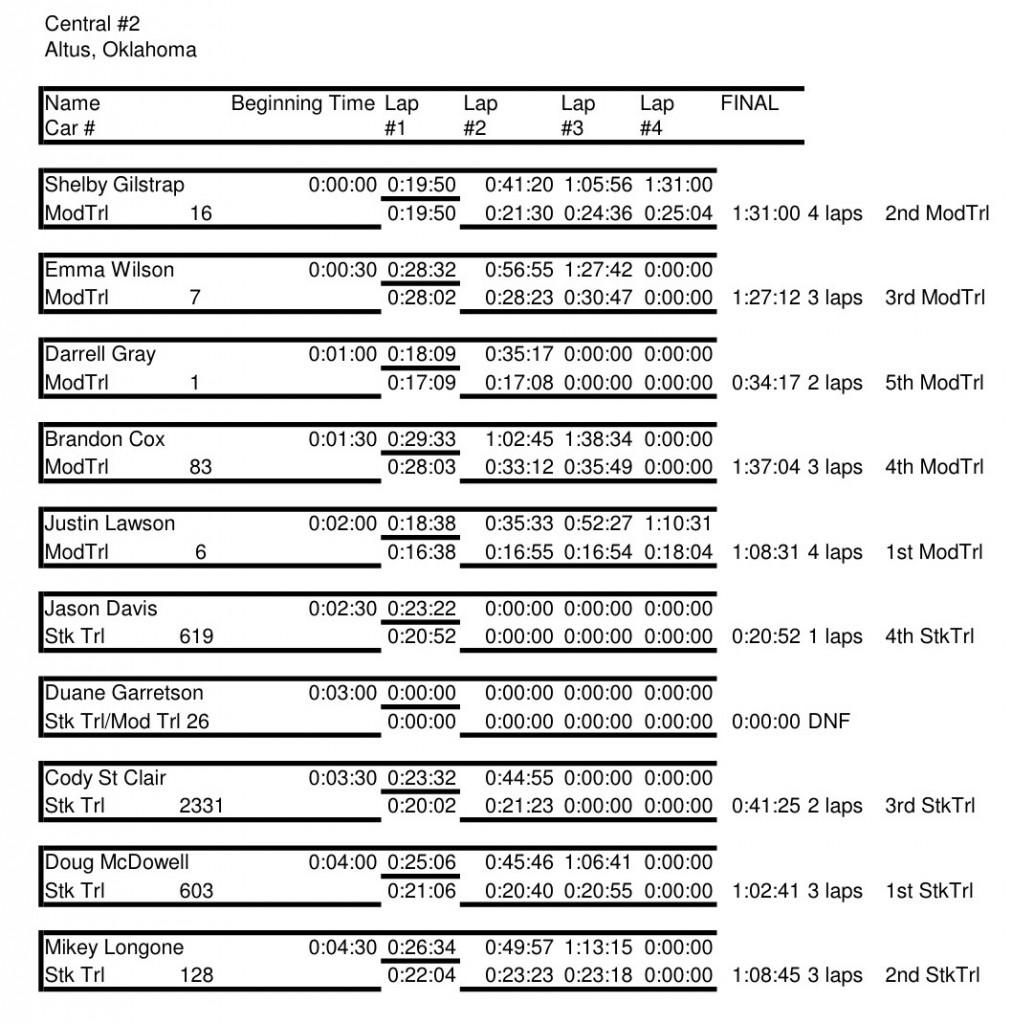 This will be the second round of three in the longest running  Central Series. 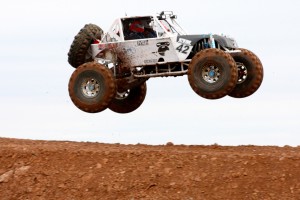 PLACERVILLE, CA   APRIL 10, 2013:  The Dirt Riot Central Series continues to draw professional racers, local 4×4 club members and UTV racers to form a 2013 series that is already heavily contested in all classes this year.  This weekend, the 2013 Dirt Riot Central Series second of three races will be at Coppermines Offroad Park on Saturday April 13th, with racing starting at 9am.  “We are excited to be back at the Coppermines Park, it always has so much to offer for the racers and spectators that we really enjoy our time there.  There was some strong weather at the beginning of the week which helped water down the track, and since it has improved to what should be mid-70’s and clear by the weekend,” said Rich Klein, President and founder of W.E. Rock Events.  “The course this year will include more of the park, and the post party on Saturday night at the onsite Red Dawg Saloon should be a ton of fun with a live band.” 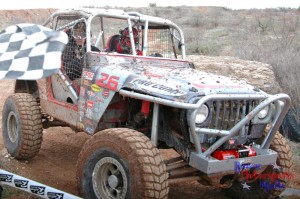 Drivers that are confirmed to race at this event include Dirt Riot 2012 National Title holder Levi Shirley and his dad Brian Shirley.  Texas locals, Clay Gilstrap with his fiancé co-driver Lindsay Syler.  Crawling Chaos Club Members Carl Langerhans and Shawn Inman.  Doug Kahlstrom will be in attendance along with Aaron Peters debuting his brand new Ultra4 car, and many others will register on Friday at the Driver Meet and Greet located at the park.  The Stock Trail and Stock Mod 4×4 class will have common names at the Dirt Riot events including 2012 Central Series Stock Mod Champion Come Get Ya Some Duane Garretson.  There are also over 10 UTV’s already registered to race including last series race winner Wesley Gryner and Matt Enochs.  With only some simple safety requirements, anyone is welcome to join and race as part of the action! 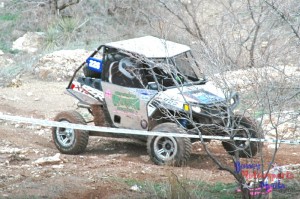 There are 3 Professional 4×4 classes, a Trail/Sportsman 4×4 class and a UTV class.  The classes are built to encourage local 4×4 or UTV participants to join us in a day of fun racing.  For registration information go to http://www.werocklive.com/2013-registration-form. Dirt Riot is an Endurance Racing series that is composed of 4 series of 3 races that stretch across the country.

Spectators are encouraged to come and enjoy the day of entertainment on Saturday April 13th.  Qualifying for the 4400 4×4 group starts at 9am.  Side by side racing action starts at 10am when three classes take the course at the same time for a one hour grand prix finish race: Trail Class, Stock, and Modified Stock.  Following at 12:30pm, the UTV Class will race for one hour, followed by the professional 4400 4×4 at 2pm who will race for three hours with a grand prix finish at approximately 5pm.  The winners of each class are determined by the most number of laps completed in the set amount of time.  The awards ceremony and cash payout immediately follows the final race. Admission is $15 for adults, $5 for ages 8-15, children 7 and under free and Military with ID get $5 off. There are vendors, food and amenities on site, and we encourage you to bring chairs and shade structures.

The race course is approximately 7.4 miles long and incorporates a variety of terrain including a modified motocross short course track, wash bottoms, rocky ledges, rally style dirt roads, rolling hills and goat trails.  This year there will be additional pieces of the Coppermines Offroad Park incorporated around the Red Dawg Saloon including a stadium jump, the telephone pole wall, concrete drainage pipes and tank traps.  It will be easy enough for UTV’s and Stock 4×4 participants to have fun, but tough enough for the Pro 4400 cars to be challenged.

CLICK HERE to pre-purchase tickets.  Please use this method if you would like to use a credit card. There is limited online access at most event sites to process credit cards.  These are rain or shine events, no refunds.

See the Pictures, Results and Video from First Round in Bryan TX at the Brazos Valley Off-Road Ranch: http://www.werocklive.com/2013/dirt-riot-central-series-1-bryan-tx/ 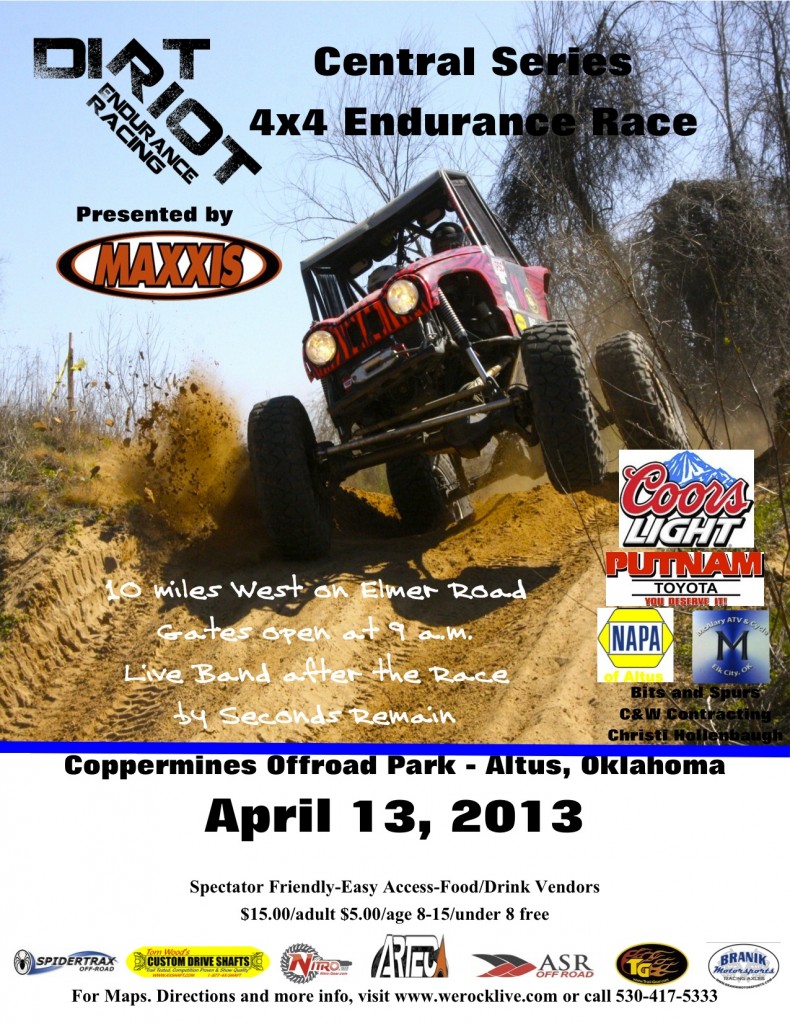 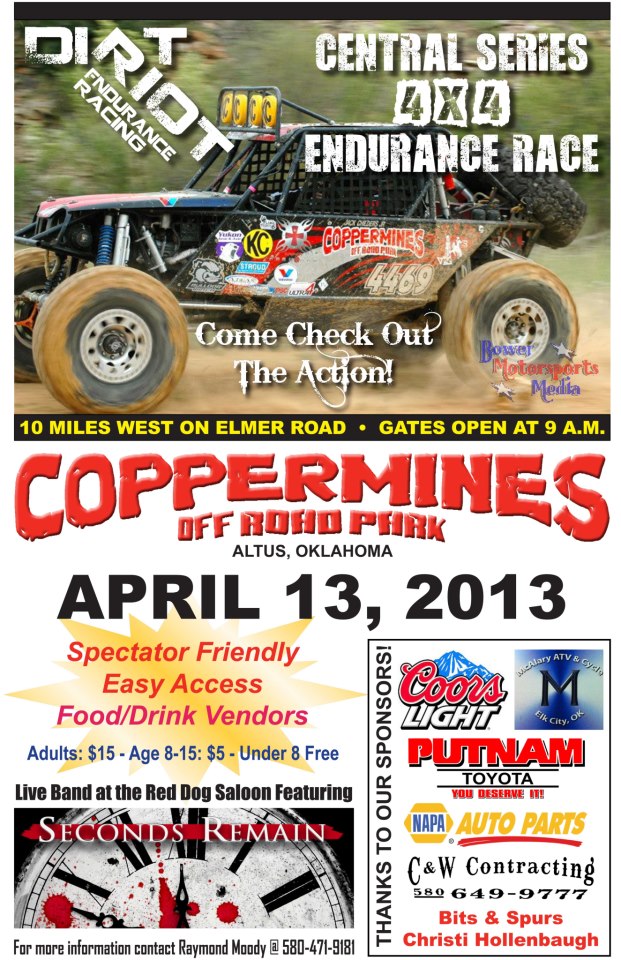