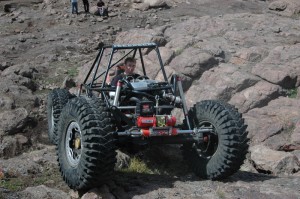 RENO, NV     MARCH 30, 2011   Torchmate Racing will be in full force at the opening round of the W.E. Rock Nationals this weekend in Tucson, AZ with Jesse Haines competing in the Unlimited Class and Roger Norman competing in the ProMod Class.  Also on the track this weekend will be Torchmate Racing Rusty Bray at the TREC series and five-year-old Gwen Garwood in a Sprint Kid Kart.

Jesse Haines bought his winning Unlimited Class buggy back and is excited to be competing in the Unlimited Class this year.  “Not many people know, but I sold my Pro Mod and will be running the Unlimited Class again,” said Haines.  JT Taylor will be spotting for Haines.  He has won an astounding twelve rock crawling competitions from Pennsylvania to California, a series championship, and had dozens of podium finishes. Between competitions, Haines has built numerous championship-winning vehicles for both himself and other competitors. 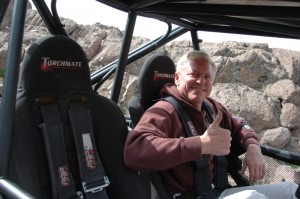 Roger Norman will be competing in his first ever rock crawling event this weekend in the Torchmate Racing Pro Mod car.  Normally the pilot of the #8 Crystal Bay Casino winning Trophy Truck, Roger Norman will experience the slow and technical side of rock crawling.  “Communication is the key.  It’s all about listening and doing exactly what the spotter says.  It’s like having a puppet master,” said Norman after practicing in Reno, Nevada earlier in the week.  “I have been on Fordyce and the Rubicon Trail before, but never as a driver, just as a passenger,” comments Norman about his previous experience.  “I am ready and excited to compete this weekend!”  Mike Shaffer will be spotting for Normans premier appearance.

Also on the track this weekend will be Torchmate Racing’s Rusty Bray racing his Ultra4 car in the TREC Series at the Badlands Off Road Park in Attica, IN.  Bray recently finished the King of the Hammers 45th after qualifying through the Last Chance Qualifier.  The TREC series offers a 12+ mile course that has been designed around speed and endurance, not necessarily the difficulty of an obstacle including rocks, hills, mud and sand.

Track the success of each of the racers over the weekend on Torchmate Racings Facebook page, and then check www.TorchmateRacing.com next week for their full event recaps.

Torchmate CNC Cutting Machines can be purchased and more information can be found at www.Torchmate.com.

Video of Jesse Haines in his Unlimited Car: http://www.youtube.com/watch?v=cDmDxQxuY1o

About Torchmate : Torchmate CNC Cutting Systems has been bringing affordable CNC plasma cutting tables and other automation solutions to manufacturers worldwide for over 30 years, and have now extended their product line to include a 2×2 table suitable for any fabricators’ garage.  Torchmate Racing has supported the offroad racing community through marketing partnerships and putting their key employees behind the wheel of the best equipment.  The Torchmate Racing Team is currently involved in racing a Class 6 in the SCORE Baja series and BITD, a Rock Crawler in CalRocs and W.E. Rock, an Ultra4 racer and also support multiple racers in other series including CHCA, TORC, LOORRS and Dirt Track.  Please join the thousands that are already part of the Torchmate family.  Call toll free today at (866)571-1066 or internationally at (775) 673-2200 and let one of the trained CNC professionals guide you through every step of the CNC cutting process.   www.torchmate.com

About Jesse Haines: Over the past decade Jesse Haines has established himself as one of the top fabricators in the off road industry while simultaneously cementing his legacy as one of the winningest drivers in rockcrawling history. Haines was first introduced to rockcrawling while competing at the legendary Four Wheeler Magazine Top Truck Challenge in 2002 and quickly developed a passion for the sport. Just three short years later, Jesse found himself atop the podium as the WE Rock Unlimited Class National Champion in a vehicle of his own design. To his record, Haines has won an astounding twelve rockcrawling competitions from Pennsylvania to California, a series championship, and had dozens of podium finishes. Between competitions, Haines has also built numerous championship-winning vehicles for both himself and other competitors. Haines has been on the leading edge of the wildly popular Ultra4 Racing explosion with respectable finishes at VORRA desert races, the Ultra 4 Stampede, and the King of the Hammers. Throughout his career Haines has been seen on Trucks TV, Extreme 4×4, Superlift TV, Lucas Oil – On The Edge, MTV’s Megadrive, and Modern Marvels.
Marketing Partners: Torchmate, Maxxis, PSC, Superior Axle and Gear, Raceline Wheels, Branik Machine Shop, High Angle Driveline

About Roger Norman: Roger Norman will make his premier appearance as a rock crawler in the 2011 W.E. Rock series driving the Torchmate Racing ProMod crawler. His rock crawling experience to date may only include traveling the Rubicon Trail in his stock Hummer, but he is a highly acclaimed desert racer with multiple wins including the 2008 Baja 1000 and the 2010 Mint400.  Roger grew up on the helm of his step-father Bill Muncey’s racing career driving Miss Atlas Van Lines Hydroplane with a exceptional career of over 100 wins. Roger’s first desert race was in 1996, when he competed in BITD Vegas to Reno in a Class 10. He has raced in almost every class, in almost every series including SCORE, BITD, NORRA, CODE and SNORE. Roger has raced, or strived to race, everything. He and his high school sweetheart Elise own the Crystal Bay Casino in Lake Tahoe, CA along with other properties used for offroad and recreational use.
Marketing Partners: Crystal Bay Casino, BFGoodrich, KMC, Vision X, K&N Filters, Mastercraft, Fire ETC, NEO, CMI, Big Ass Fans, Safety Kleen, Eibach Springs, Cruz Roja, Baja Fools, Rod End Supply, High Angle Drivelines, Trail Glow, Galley at the Marina