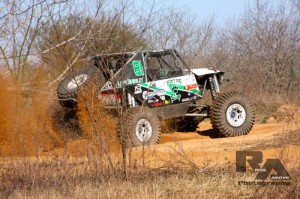 Dirt Riot’s Central Series started off with a bang at the Brazos Valley Off-Road Ranch just outside of College Station, Texas, the home of Texas A&M and Johnny Football.  Levi Shirley, the winner of the Pro 4400 class, is starting the season out on the right foot to repeat last years Central Series and National Title Wins.  Spectators who came out to enjoy the full day of racing action got to watch UTV’s, stock 4×4 trail rigs and highly modified rock buggies battle the rocks and fast speed sections to see who could complete the most laps in a set amount of time.  “We love coming to Texas for the racing, the friends and camaraderie,” said Rich Klein, President and founder of W.E. Rock Events.  “I really enjoy our group of racers because they all have heart, it was awesome to watch the end of the Pro 4400 race as all the drivers helped their fellow competitor Tony Arledge get across the finish line.” 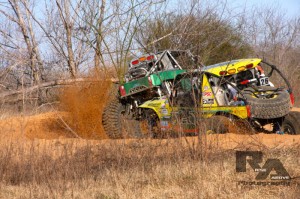 In the Pro 4400 class, the checkered flag was thrown for Levi Shirley as he came through the finish and was followed quickly by six other racers Clay Gilstrap, Brian Shirley, Shawn Inman, Doug Kahlstrom, Carl Langerhans and Chip MacLaughlin.  Kyle Bruso would be the only 4400 class that wouldn’t see the checker flag after breaking about three laps before the finish, although still took a 6th place finish.  At that point, the only driver left on course was Tony Arledge and within sight of the checkered flag, but with no steering.  He had made the turn into the spectator viewing short course area just short of the start finish line and his car led him up an embankment towards the pond, but he could go no further.  Tony ran back to the pits to get tools and parts to fix the steering, so the clock continued to run for him to finish. After a few minutes, the co-driver called race ops and asked if he could help steer the car from outside; there were no other cars on course, so it was approved.

Dirt Riot races are no chase and no outside assistance races, however they can use the assistance of other competitors.  There was a large crowd of drivers at the start/finish line who noticed what was going on and started jogging out to help, no one was going to protest the finish and off they fled.  The other drivers steered the car down into the bowl, around the dirt track and up the hill to the finish line by physically shifting the tires in to the direction they needed to go.  Tony Arledge took the checkered flag with a big rev of the engine for his first race of the season. 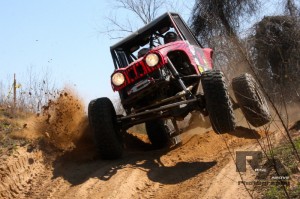 Stock Modified Class and the Stock Trail Class ran together for two hours of pacing the 4 mile course at Brazos Valley Off-Road Ranch who’s trail system crisscrosses 300 acres of an old gravel pit system.  Darryl Gray finished first in the Modified Trail Class, completing 10 laps, in comparison to the pros completing 13 laps.  BJ Allen took second, Duane Garretson third, Shelby Gilstrap fourth, Cody Consford fifth and Aaron Ward had a tough day breaking on lap one. In an act of sportsmanship, Duane Garretson handed his third place trophy to Shelby Gilstrap at the awards ceremony in appreciation of her stopping to be available to assist him up the final hill when he had no 4 wheel drive and was just feet from the finish line. 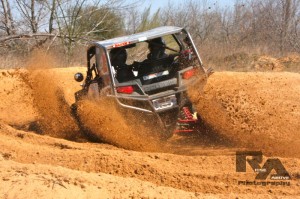 The UTV class is never a side show, especially at these Central Series Races. The car count at this Central Series Round 1 event was 16, a great turn out with some tough competition.  Congratulations to Wesley Gryner who took first completing 7 very fast laps within an hours time.  Less than two minutes behind and also with 7 laps was 2nd place Brian Shirley, and 30 seconds behind him 3rd place Terrell Gauny.  Tim Jackson was one minute behind placing 4th and another minute behind in 5th was Jonas Marasek.  Still with only a minute separating, but only 6 laps complete, 6th place went to Derek Gauny, 7th to Casey Strickland and 8th to Clay Gilstrap.  Finishing the field, Levi Shirley took 9th after a spectacular crash, Terry Kenyon 10th, Cody Keller 11th, BJ Kohllepel 12th, Jonas Burnett 13th, Kyle Holland 14th, Gerry Davis 15th and Trey Perry wasn’t able to start after qualifying.

Dirt Riot is an Endurance Racing series that is composed of 4 series of 3 races that stretch across the country.  This particular race course started off with 3/4 mile of high speed straightaway on pea-gravel and then jumped into some canyons and ravines and then back out to a 1/4 mile high speed section back to the start/finish. The next section is some gravel hills (whoop-d-doos) followed by climbs and downs through some old gravel pits with a number of trees and tight ravines in this section.  There were some off-camber drops and off-camber climbs and the course jumps back up to the top level to skirt some holding ponds, through a short course section then by the hot pits and then around the parking area to the start/finish.

The next Central Series Race will be April 13th at Coppermines Offroad Park in Altus, Oklahoma.  Last years event included a fun pre event Driver Meet & Greet on Friday afternoon and post event party on Saturday night at the park.

The next Dirt Riot race is this weekend for the opening round of the Southwest Series in Congress, Arizona. 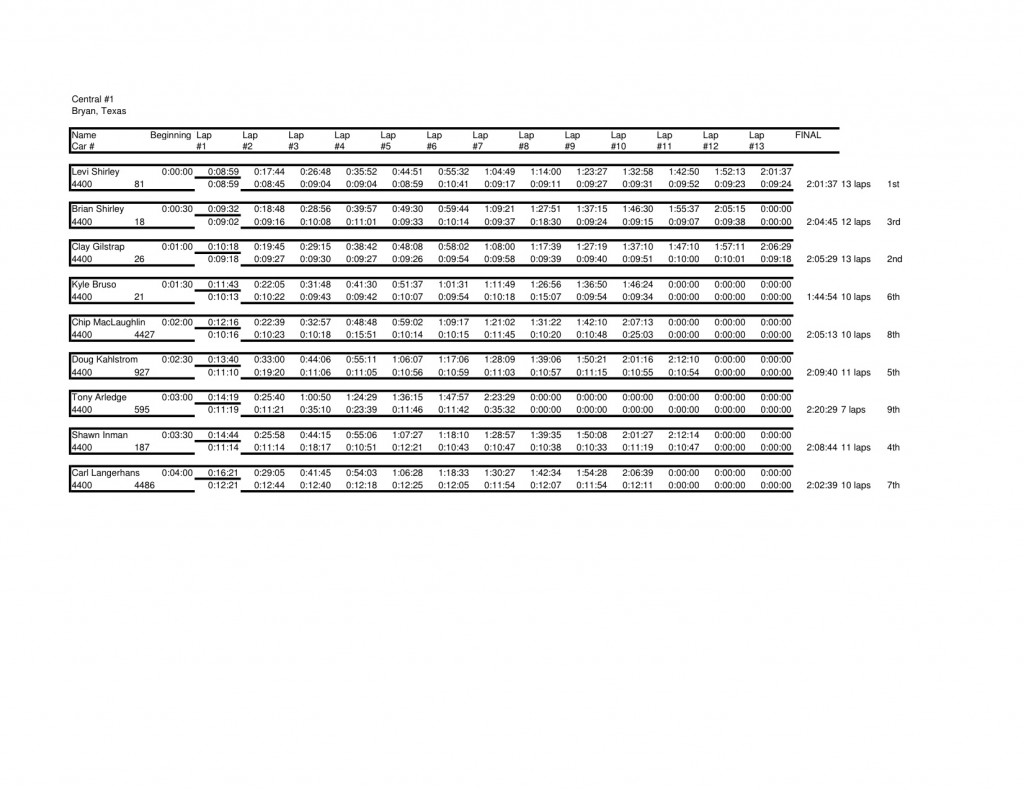 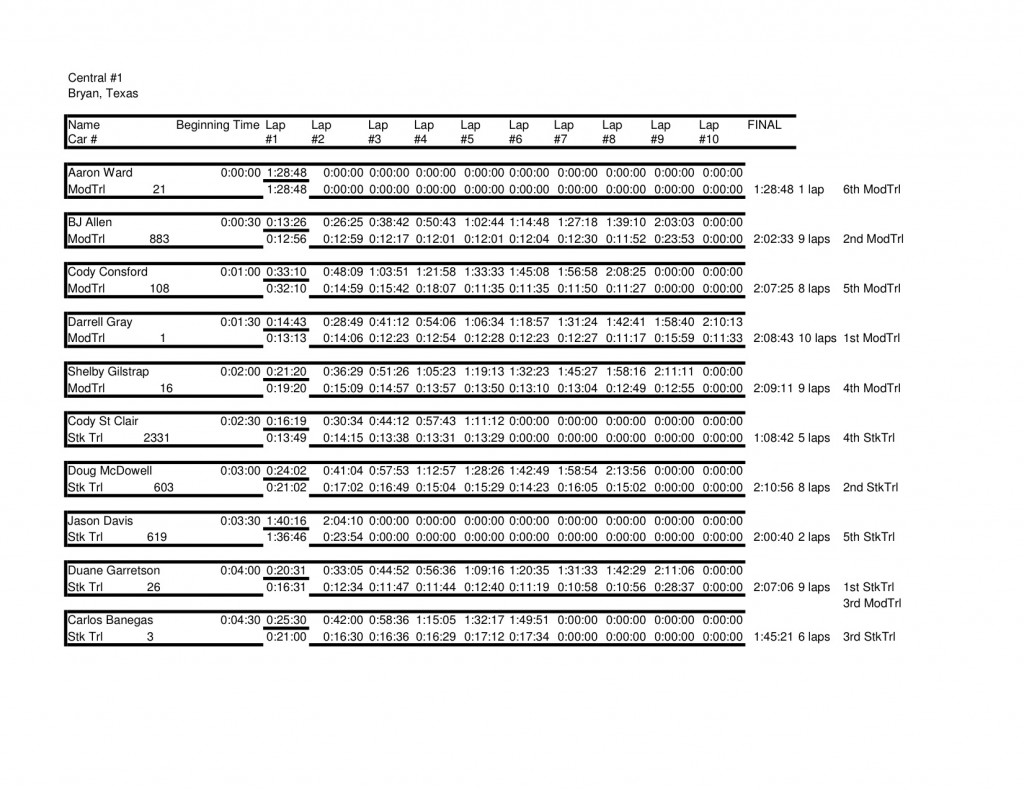 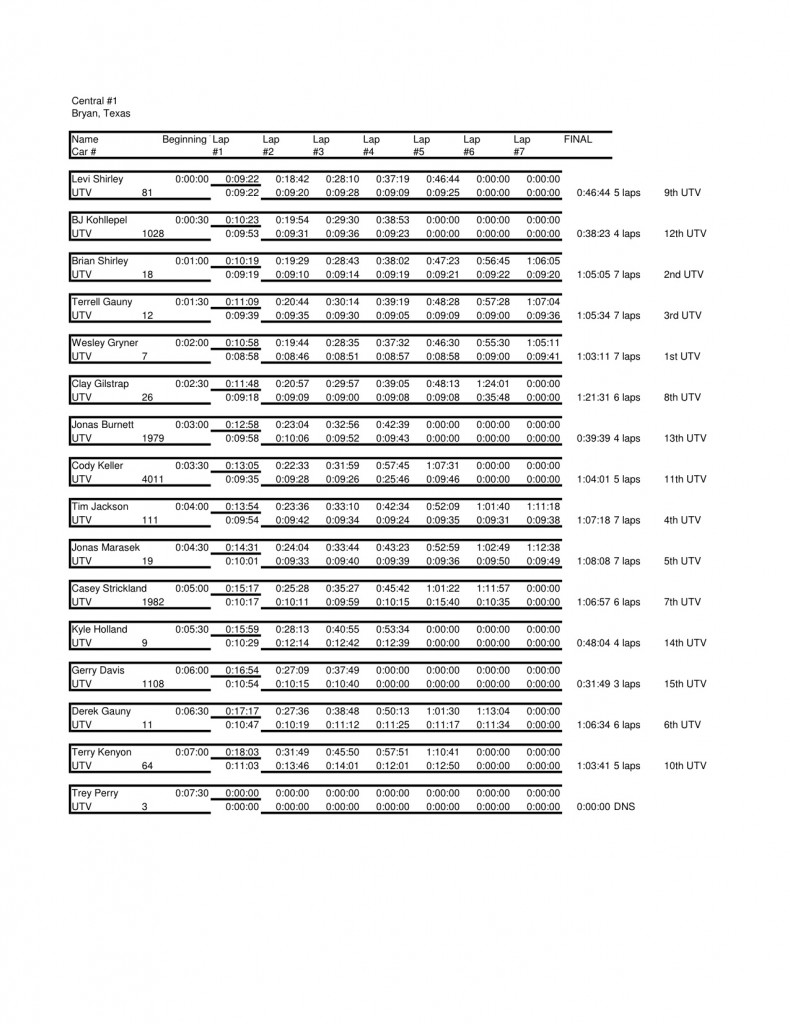 Additional Media Attention to this Event:

A healthy dose of perfect Texas weather greeted racing teams for the Dirt Riot Central Series race March 1 – 2 in Bryan, Texas. The race entries included 16 UTV teams from all over the Midwest. Three-hundred acres of abandoned gravel mines at Brazos Valley Off-Road Ranch made for an outstanding venue to host one of the 2013 season’s first desert endurance races in the Lone Star state.   …READ FULL ARTICLE…CLICK HERE

Compliments of See You On The Trail

We would like to Thank Brazos Valley Off-Road Ranch who has opened up their Park for the Dirt Riot Series.   Be sure to see their website:  http://www.brazosvalleyoffroadranch.com.  To see the terrain that you will be racing on, be sure to see their photo album: http://www.brazosvalleyoffroadranch.com/index.php?option=com_content&view=article&id=20&Itemid=50 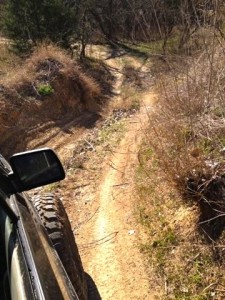 PLACERVILLE, CA   FEBRUARY 27, 2013:  The Dirt Riot Central Series drew professional racers, local 4×4 club members and UTV racers to form a 2012 series that was heavily contested in all classes last year.  Levi Shirley, a 20 year old from Kansas, would end the season with the Pro 4400 Central Series Championship and the National Title, a prestigious title awarded to the driver with the most points across all 4 US series.  This weekend the 2013 Dirt Riot Central Series opener will be at Brazos Valley Off-Road Ranch on Saturday March 2nd, with racing starting at 9am.  “The trail system at Brazos Valley Off-Road Ranch is amazing crisscrossing 300 acres of an old gravel pit system.  Our course will only be about 4 miles of their trail system that would take 2-3 days to run,” said Rich Klein, President and founder of W.E. Rock Events.  “Bryan, Texas is a new location for us as an event, so we look forward to exploring the town more and encouraging spectators to come watch this national series.”

Drivers that are confirmed to race at this event include Dirt Riot National Title holder Levi Shirley and his dad Brian Shirley.  Texas locals, Clay Gilstrap with his fiancé co-driver Lindsay Syler.  Crawling Chaos Club Members Carl Langerhans, Tony Arledge and Shawn Inman who will have his brand new car on course. Kyle Bruso will be making the drive from Arkansas, and many others will register on Friday at the Driver Meet and Greet located at the ranch.  The Stock and Stock 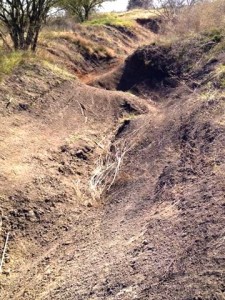 Mod 4×4 class will have common names at the Dirt Riot events including 2012 Central Series Stock Mod Champion Duane Garretson, Aaron Ward and BJ Allen.  There are also over 10 UTV’s already registered to race, and with only some simple safety requirements, anyone is welcome to join the action!

There are 3 Professional 4×4 classes, a Trail/Sportsman 4×4 class and a UTV class.  The classes are built to encourage local 4×4 or UTV participants to join us in a day of fun racing.  For registration information go to http://www.werocklive.com/2013-registration-form. Dirt Riot is an Endurance Racing series that is composed of 4 series of 3 races that stretch across the country.

Spectators are encouraged to come and enjoy the day of entertainment on Saturday March 2nd.  Qualifying for the 4400 4×4 group starts at 9am.  Side by side racing action starts at 10am when three classes take the course at the same time for a one hour grand prix finish race: Trail Class, Stock, and Modified Stock.  Following at 12:30pm, the UTV Class will race for one hour, followed by the professional 4400 4×4 at 2pm who will race for three hours with a grand prix finish at approximately 5pm.  The winners of each class are determined by the most number of laps completed in the set amount of time.  The awards ceremony immediately follows the final race. Admission is $15 for adults, $5 for ages 8-15, children 7 and under free and Military with ID get $5 off. There are vendors, food and amenities on site, and we encourage you to bring chairs and shade structures.  For additional details go to http://www.werocklive.com/events/dirt-riot-central-round-1. 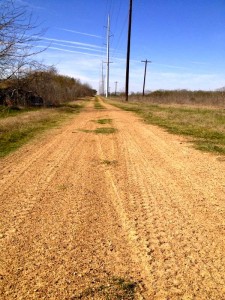 The race course starts off with 3/4 mile of high speed straightaway on pea-gravel and then jumps into some canyons and ravines and then back out to a 1/4 mile high speed section back to the start/finish. The next section is some gravel hills (whoop-d-doos) followed by climbs and downs through some old gravel pits – there are a number of trees and tight ravines in this section.  Be prepared for some off-camber drops and off-camber climbs, the course jumps back up to the top level to skirt some holding ponds, through a short course section then by the hot pits, around the parking area to the start/finish. 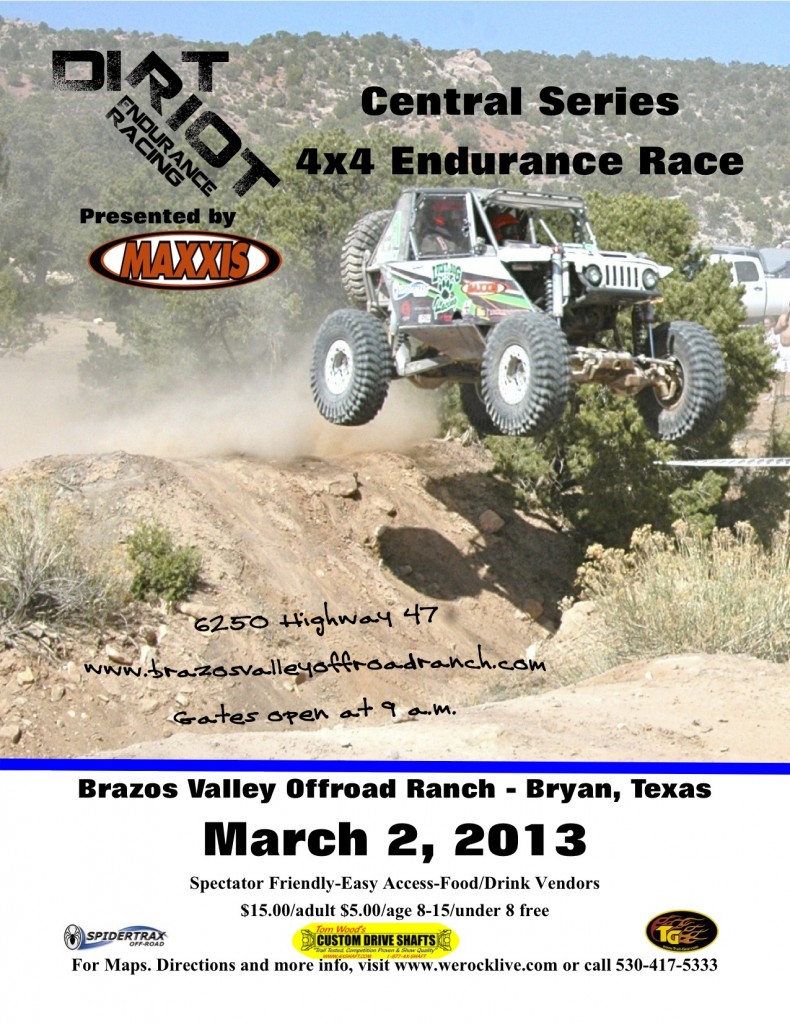