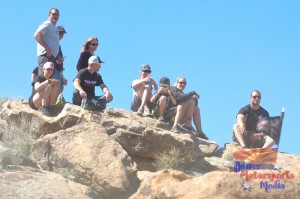 PLACERVILLE, CA   MARCH 25, 2013:  The Congress event was another step in W.E. Rock history, hosting a two day event comprised of the Trail Gear Western Series Professional Rock Crawling on Saturday, March 16th and the National Dirt Riot 4×4 Endurance Racing series kicking off its Southwest Region races on Sunday, March 17th brought to you by 4 Wheelers Supply of Phoenix, Arizona. The events took place at Thompson’s Ranch, just outside of Congress, Arizona, only 2 hours from the greater Phoenix area.  “I can’t be happier with the way the weekend went,” said Rich Klein, President and founder of W.E. Rock Events.  “We had a group of happy racers and a group of awe struck spectators!  There is no way to not walk away from that type of event ready to keep the momentum into our next race in Moab, Utah.” 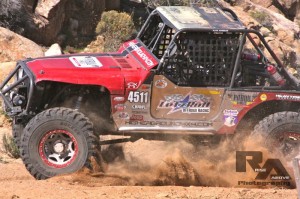 4Wheelers Supply Dirt Riot race on Sunday morning started with the Pro 4400 class qualifying.  The times?  Unbelievable!  There was only a 12 second split between the top five racers.  The race later in the day was going to be exciting, with the talent so well matched, it would truly be a race of attrition with 3 hours of racing to the checker flag.   Dirt Riot Racing puts race buggies, 4×4 trail jeeps, and UTVs on a track to complete as many laps as they can within their group’s set amount of time.  The course was more primitive with narrower roads and a really fun sand wash with lots of boulders to dodge.

The morning race had 20 vehicles on course between four classes.  Three of the classes were a one-hour race and the Pro 4600 class ran for two hours.  Again it was a race of attrition; tires, overheating, track bars and charging issues were just some of the problems.  When it came time for the checker flag to drop, it was Ryan Miller in the Modified Trail Class who completed 6 laps in the fastest amount of time.  Matt Hinitt took second, Jayson Mitchell took third, 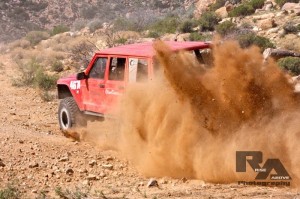 The Pro 4600 Class started with four competitors going for the cash payout and at the end of two hours ended with three, the fourth – Jason Kaminsky – had a short day with a track bar running through his radiator.  Cody Folsom from Cortez, Colorado took the class win with Every Man Challenge drivers Shawn Passmore and Matt Salyers finishing second and third respectfully. 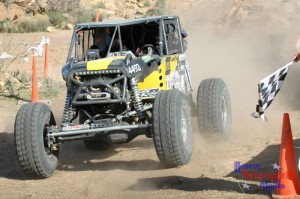 The afternoon Pro 4400 4×4 race started with Andrew McLaughlin from LetzRoll Offroad on the pole position.  Thirty seconds apart, the cars went off the line for a three hour race, including the Pro 4500 class car that would race for two hours. On the first lap that averaged about 10 minutes, there was no passing and the dusty Arizona desert conditions kept them about equally spread out, but there was still almost 3 hours to go.  Andrew McLaughlin would run a clean race all the way to the end and finish with 18 laps and the win.  Nathan Unruh finished second without 4 wheel drive all day long, Todd McCullen from Desert Fab finished third with having to stop every three laps to get additional fuel so it would pick up, and in a very close fourth was Jeremy Hammer from Fly-N-Hi Offroad who turned the rig on the side on the last lap.  John Brock finished fifth in a car they finished in the pits the night before, Jeremy Ford finished 6th with 14 laps and Airen Patrick finished 7th with his 71 year old co-driver, Charlie.  Jack Adams finished 8th, Jim Evans finished 9th, and after a day of rock crawling on Saturday, Jesse Haines blew his transmission and finished 10th.  Alan Johnson won the Pro 4500 Class.

To Read the Recap on the W.E. Rock Rock Crawling, Click Here 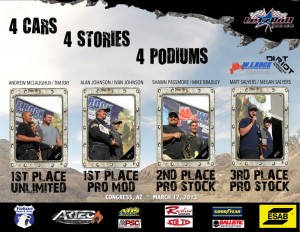 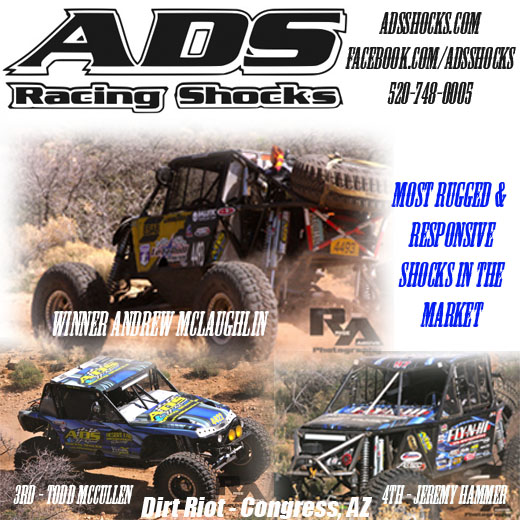 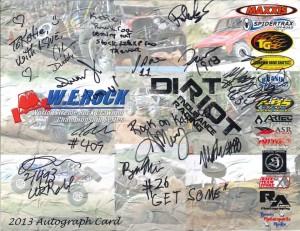 Just some of the thousands of pictures from last weekend!  We still have more to share, so come back soon! 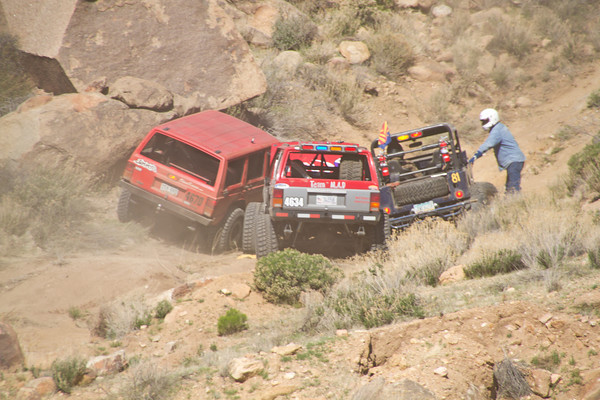 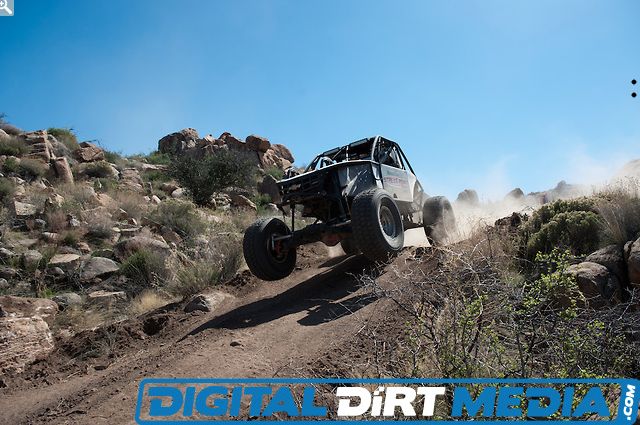 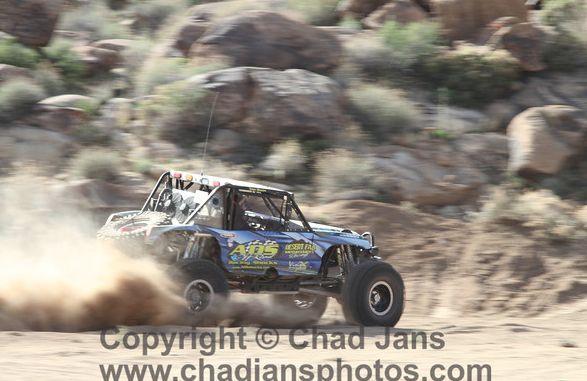 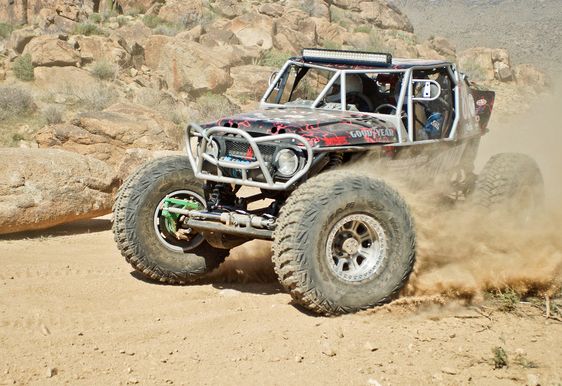 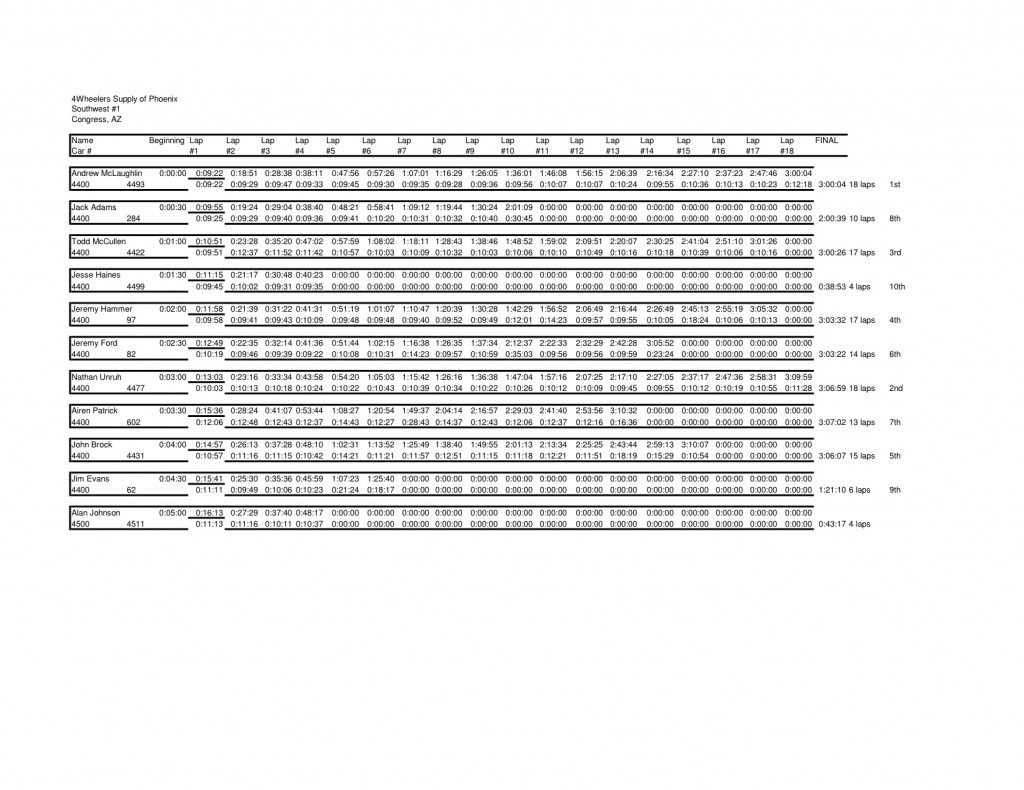 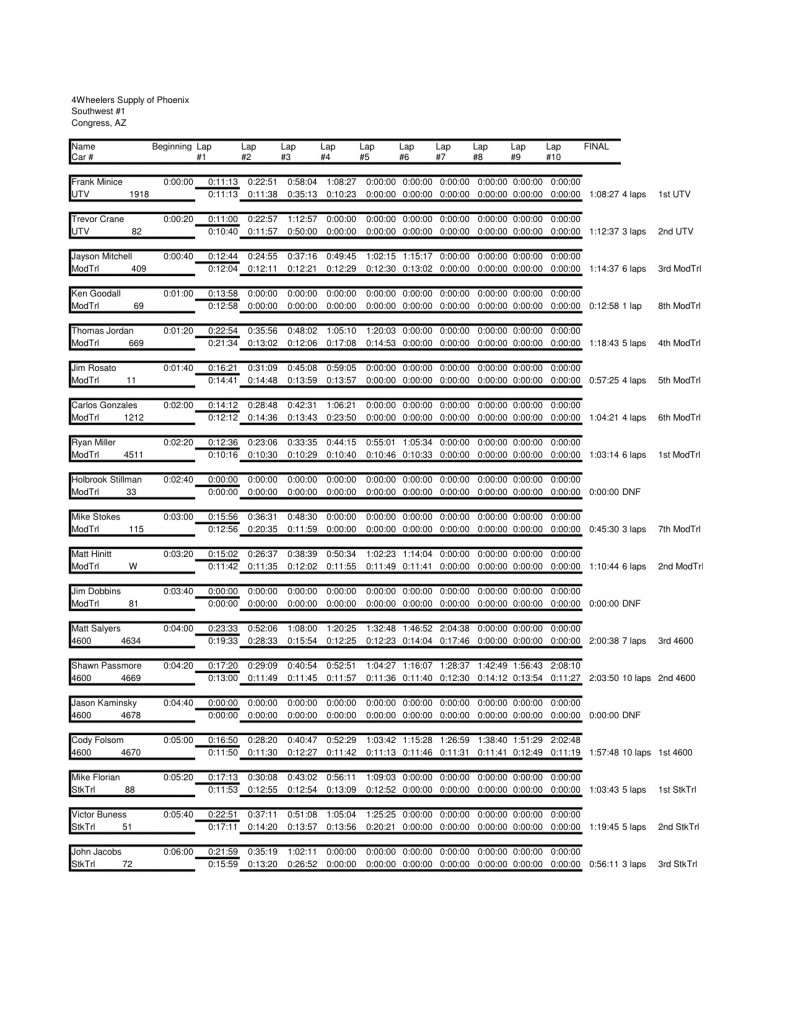 The Southwest Series has even more to offer this year with 2 of the 3 events on the same weekend as W.E. Rock Rock Crawling!  Last year, each of the classes had multiple drivers with competitive spirit out to challenge each others skills. 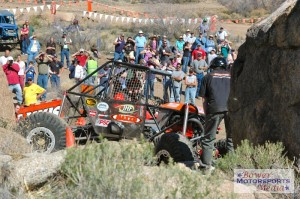 PLACERVILLE, CA   MARCH 13, 2013:  This weekend marks a first in W.E. Rock history, hosting a two day event comprised of the Western Series Professional Rock Crawling on Saturday March 16th and the National Dirt Riot 4×4 Endurance Racing series kicking off its Southwest Region races on Sunday March 17th brought to you by 4 Wheelers Supply in Phoenix, Arizona.  This weekends events are very spectator friendly at the Thompson’s Ranch just outside of Congress, Arizona, only 5 miles down a dirt road that is better maintained than in years’ past and suitable for small cars.  “The terrain in Arizona is always amazing and the competitors love coming here.  We are back at the Thompson’s Ranch which is where we held our 2006 and 2007 Extreme Put-Up or Shut-Up Events, so this Saturdays Rock Crawl is going to be a lot of fun to watch with Pros coming from up to 14 hours away,” said Rich 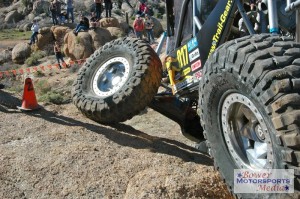 Klein, President and founder of W.E. Rock Events.  “Then on Sunday we are having the Dirt Riot race that will put speed on the track, of course we welcome local UTV’s and Trail Class drivers to come and race, everyone is welcome!”

Professional Rock Crawling is one of the most intricate sports in the motorsports arena.  It is technical, mechanical and filled with action.  The rock courses are setup on a wall where spectators can bring their chairs and be able to see multiple courses running at the same time.  This will be a one day rock crawling event, each competitor completing a total of 6 courses.  The winner will be determined by the driver that has the least amount of points at the end of the day, similar to golf.  There are over a dozen drivers already committed to coming to compete, some driving over 14 hours to be part of this professional series.  Names that are familiar include Unlimited Drivers Matt Messer and Jesse Haines;  Pro Mod Drivers include last years series winner Jason Feuilly and Grand National winner Aaron Sykes.  Additional drivers that are scheduled to compete include Justin Hall, Randy Southall, Bruce Zeller, Tracy Jordan, Buzzy Bronsema, 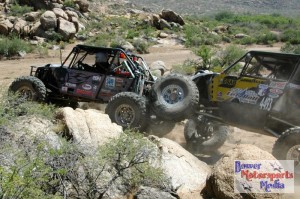 Jared Neff, Mike Stokes, Jeremy Hammer Chris Najarewica, Paul Tyler and others.  There is a stock class that any local drivers are welcome to compete in.

Dirt Riot Racing picks up the speed and puts race buggies, 4×4 trail jeeps, and UTVs on a track to complete as many laps as they can within their groups set amount of time on Sunday.  The course is more primitive than last year, with not as many cut roads, but a more open cross country type course including a really fun sand wash with lots of boulders to dodge.  Racers include Dirt Riot Southwest Series Winner Mike Klensin and King of the Hammers finisher Andrew McLaughlin.  Also scheduled to race are Matt Messer, Jeremy Hammer, Nathan Unruh, John Brock, Todd McCullen, Bailey Campbell and others.  In the Stock Classes, we will have 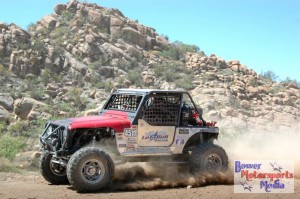 Southwest Series winners and National Title holders Alan Johnson and Shawn Passmore racing rigs that they just competed in the Everyman Challenge at the King of the Hammers with.  In the Trail Class, which is more of a run-what-you-bring class with some safety requirements, there looks to be a large contingent coming to race out of the local Arizona Undertakers Club.

Both day’s events have classes that are built to encourage local 4×4 or UTV participants to join us in a day of fun competition and racing.  For registration information go to http://www.werocklive.com/2013-registration-form.   W.E. Rock is a Professional Rock Crawling series composed of 2 series of 3 events each that crisscross the country.  Dirt Riot is an Endurance Racing series that is composed of 4 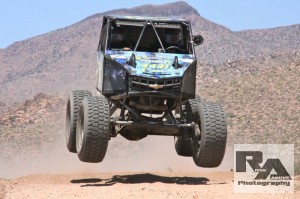 series of 3 races each that stretch across the country.

Spectators are encouraged to come and enjoy the day of entertainment on Saturday March 16th with Rock Crawling starting at 10am, and the final shootout expected to begin about 5pm.  On Sunday March 17th, qualifying for the 4400 professional group starts at 9am.  Wheel to wheel racing action starts at 10am when the trail class takes the course for a one hour grand prix finish race.  Following at 11:30pm, the UTV Class will race for one hour, followed by the Stock, and Modified Stock who will race for a two hour grand prix finish starting at 1pm.  The professional 4400 4×4 is scheduled to start at 3:15 for three hours with a grand prix finish at approximately 6:15pm.  All times are subject to change.  The winners of each class are determined by the most 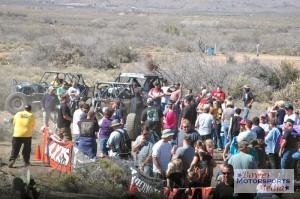 number of laps completed in the set amount of time.  The awards ceremony immediately follows the final race. Admission is $25 for a two day pass, $15 for adults, $5 for ages 8-15, children 7 and under free and Military with ID get $5 off. There are vendors, food and amenities on site, and we encourage you to bring chairs and shade structures. There is camping available onsite.  For additional details go to http://www.werocklive.com/events/w-e-rock-west-round-1/.

See the Pictures, Results and Video from Last Year: http://www.werocklive.com/2012/dirt-riot-southwest-round-2-congress/

We are happy to have the event at the Thompson’s Ranch in Congress, AZ this year.  We haven’t been at the ranch since the WERock Shootout over 4 years ago.  The event site is only 5 miles down a dirt road, it is NOT at Thunder Rock Offroad Ranch. 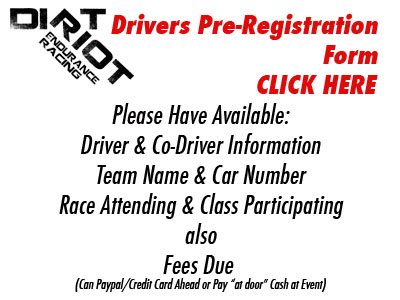 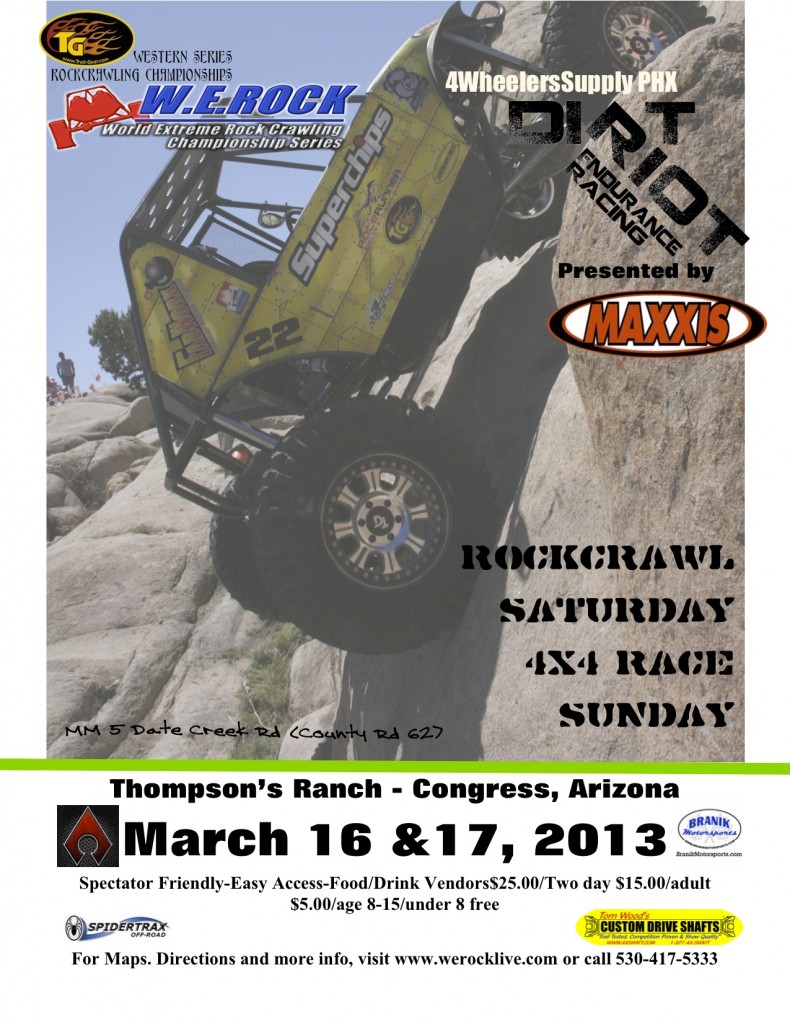