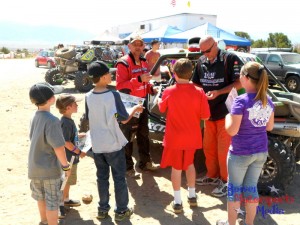 PLACERVILLE, CA   MAY 23, 2013:  The Cedar City W.E. Rock was the second ever two-day event comprised of the Trail Gear Western Series Professional Rock Crawling on Saturday, May 11th and the National Dirt Riot 4×4 Endurance Racing Southwest Regional race on Mother’s Day Sunday, May 12th.   The events took place at Three Peaks Recreation area, just outside of Cedar City, Utah.  “We had a lot of families here celebrating Mother’s Day and I am thankful for all the drivers that put on an awesome show for them both Saturday at the Rock Crawl and Sunday at the Dirt Riot race!” said Rich Klein, President and founder of W.E. Rock Events.  “This is the first time in several years that we have used BLM property.  It was with great pleasure that we can say how successful it was.  Being able to work successfully with our friends at BLM was awesome.  Special thanks to the Cedar City Field Office, Mitch Owens and others for their help in making this a successful event.”

The Dirt Riot race on Sunday started early with a final parade lap around the spectacular Three Peaks Recreation area and attached BLM land.  The six-mile course twisted through technical tree sections, moderate to easy rock sections, some high speed straight a ways and a spectacular road crossing jump that spectators could stand and watch! 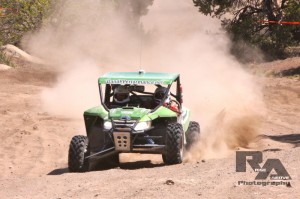 The first race of the morning had 15 vehicles on course between four classes, all racing for a full hour. Like all Dirt Riot races, it was a race of attrition; tires, overheating, loose steering bolts were just some of the problems.  When it came time for the checker flag to drop, it was UTV class Dean Bulloch from local Arctic Cat dealership D&P Performance who took first.  Frank Minice from the Arizona Undertakers, also in an Arctic Cat, took second and Cedar City local Buzz Bronsema took 3rd in his Polaris RZR.  Following in the UTV class, Jeff Rector took fourth, Bebe Thiesen took fifth and Todd Stephensen took sixth.

In the Mod Trail Class, the top three were all within a couple minutes of each other.  Ryan Miller from Arizona would take first with Rawlin McGhie in second.  Mike Stokes would take third and Paul Tyler would take fourth, both had competed in the Rock Crawling event the day before.  Carlos and Amanda Gonzales took fifth. Also on course was Stock Trail Rob Flandro winner in his Green and Black Zebra striped Toyota truck and second place Victor Buness in a stock Jeep Grand Cherokee.

Pro 4600 Class had Cody Folsom and Jason Kaminsky out on course battling each other for a win, both having minor issues that they were able to fix, it was Cody Folsom that would come out with the win at the end of the hour. 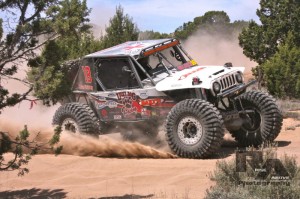 After qualifying times that determined the starting order for the afternoon Pro 4400 4×4 Race, the drivers lined up with anticipation of a fun course and lots of laps.  The winner, Brian Shirley, and second place Andrew McLaughlin would both complete 13 laps.  But the numbers don’t give the full story.  While Brian ran a clean and consistent race, Andrew had a fuel problem on the very first lap putting him at the back of the pack and he had to use the full three hours to get back into the top three.  Troy Dagen and Jeremy Hammer were right in the top four also.  On the 11th lap the Desert Fab / ADS Shocks car driven by Troy Dagen had fuel pickup problems, within sight of the pits.  With no outside assistance allowed in Dirt Riot, they worked at figuring out the problem and then decided to call the race.  His hope of a second place finish dwindled as time continued for other competitors to complete laps.  As Andrew made one lap on Troy, he gained one position and then Jeremy Hammer gained a position.  By the time the clock stopped Brian Shirley had maintained his first place, Andrew McLaughlin had climbed all the way to second place and Jeremy Hammer had maintained his consistency to take a third place podium.  Troy Dagen would take fourth, Todd Seawell with a consistent race took fifth, Airen Patrick took sixth.  Jeff Rector, who was at one point in first place on corrected time, took seventh in the 4400 class after a flat tire and Jeremy Ford took eighth with car problems early on in the race. 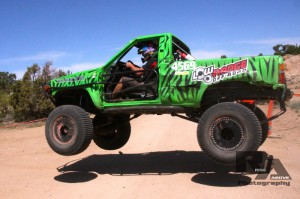 And 9th Place has its own special story!  Levi Shirley celebrated his 21st birthday on Saturday night working on his car trying to get a water bubble bled out of the cooling system that was making his car overheat.  He was still working on the car up to an hour before the race when he decided to take a ride to St. George, UT, over an hour away, to buy a new water pump.  His race time started even though he wasn’t even in the county.  An hour into the race, he returned with the part, got it put into his car, suited up and took the green flag with a little over an hour left to race.  He took off with diligence, but then he never came back around and in the Dirt Riot series you must complete at least one lap to not be considered a DNF, and to gain points towards the national series.  With literally seconds to spare, with the checker flag already waving for drivers, here came the green 81 car.  Levi had blown the rod out of the brand new water pump but had been able to reassemble it to finish the one lap that was critical for the national points chase!

On course at the same time was the two hour 4500 Pro 4×4 race.   Jeff Rector was running in both classes and took first in the 4500 class.  Second went to Shawn Rantz and third to LetzRoll team member Alan Johnson. 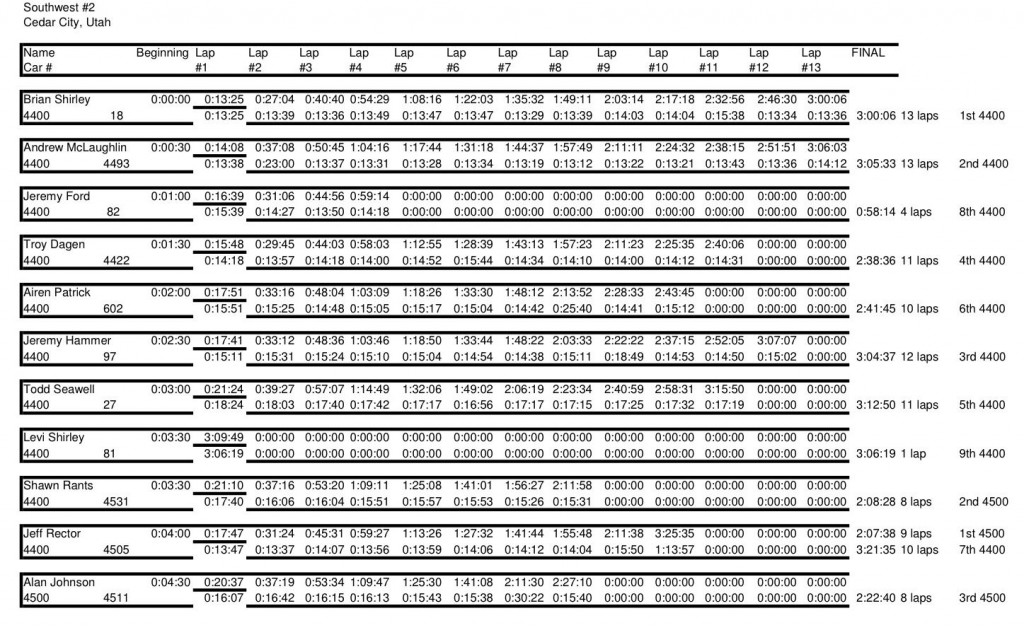 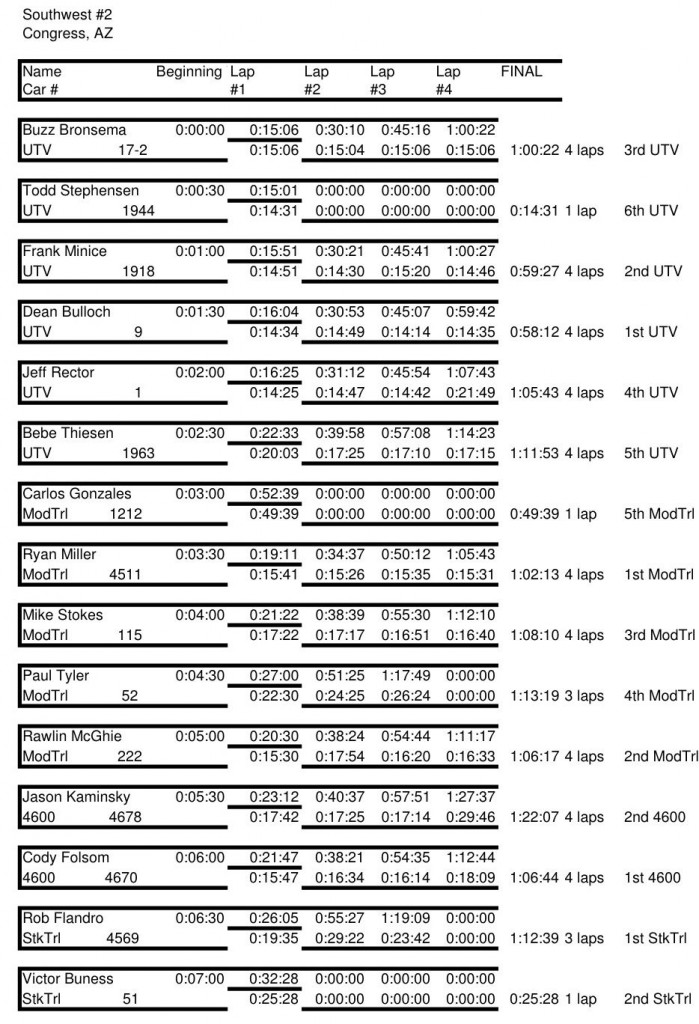 DIRT RIOT RACE IS ON SUNDAY 5/12 ; WERock Rock Crawling is on Saturday

The Southwest Series has even more to offer this year with 2 of the 3 events on the same weekend as W.E. Rock Rock Crawling!  Last year, each of the classes had multiple drivers with competitive spirit out to challenge each others skills. 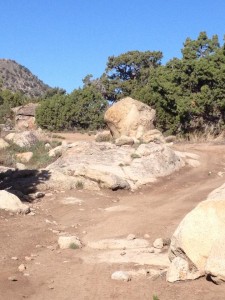 PLACERVILLE, CA   MAY 8, 2013:  This weekend will be two days of very different types of 4×4 off road racing at the Three Peaks Recreation area outside of Cedar City, Utah.  Saturday will be Professional W.E. Rock Rock Crawling all day and Sunday will be fast paced Dirt Riot Racing, with the main race not starting until afternoon.  Both events are spectator friendly and easily accessible by car at the county park.  “This is one of the original rock crawling sites in the nation that offers some of the best rock formations and best spectator viewing in the nation,” said Rich Klein, President and founder of W.E. Rock Events.  “For Dirt Riot on Sunday, I think I am fair in saying it will be the best course of the year so far with technical tree sections, moderate to easy rock sections, some high speed straight a ways and a spectacular road crossing jump!”

Both days events have classes that are built to encourage local 4×4 or UTV participants to join in a day of fun competition and racing.  For fees and payouts go to http://www.werocklive.com/2013-fees-payout.   W.E. Rock is a Professional Rock Crawling series composed of 2 series of 3 events each that crisscross the country.  Dirt Riot is an Endurance Racing series that is composed of 4 series of 3 races each that stretch across the country.  This weekends event will be the second round of the Western Pro Rock crawling series and the second round of the Southwest Series Dirt Riot. 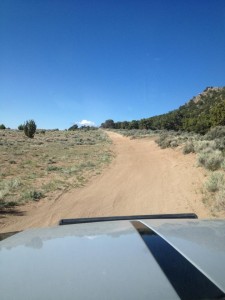 Professional Rock Crawling is one of the most intricate sports in the motorsports arena.  It is technical, mechanical and filled with action.  The rock courses are setup on a wall where spectators can bring their chairs and be able to see multiple courses running at the same time.  This will be a one-day rock crawling event, each competitor completing a total of 6 courses.  The winner will be determined by the driver that has the least amount of points at the end of the day, similar to golf.  There are over a dozen drivers already committed to coming to compete, some driving over 14 hours to be part of this professional series.  Unlimited Drivers include Justin Hall and Matt Messer; Pro Mod Drivers include last years series winner Jason Feuilly, Grand National winner Aaron Sykes along with Jesse Haines and Jared Neff.  Additional drivers that are scheduled to compete include Mike Stokes, Paul Tyler, and others coming out of California.  The stock class is available for any local drivers to compete in.

Dirt Riot Racing picks up the speed and puts race buggies, 4×4 trail jeeps, and UTVs on a 6 mile track to complete as many laps as they can within their groups set amount of time on Sunday.  Racers include Todd Seawell from Colorado, Andrew McLaughlin from Arizona, Jesse Haines from Reno, among many others.  In the Stock Classes, we will see Alan Johnson from Arizona and Shawn Rantz from New Mexico and Jason Kaminsky from Colorado racing along with others.  In the Trail Class, which is more of a run-what-you-bring class with some safety requirements, there looks to be a large contingent coming to race out of the local Arizona and Utah 4×4 Clubs.  The UTV Class should also be 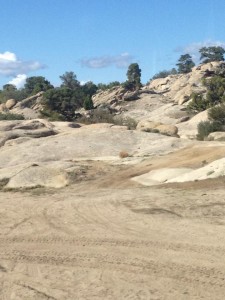 very competitive with many of the D&P Performance Arctic Cats from the local area, Frank Minice from Arizona and we are expecting Bebe Thiesen to compete again after some breakage in Moab earlier in the year.

Spectators are encouraged to come and enjoy the day of entertainment on Saturday May 11th with Rock Crawling starting at 9am, and the final shootout expected to begin about 5pm.  On Sunday May 12th, qualifying for the 4400 professional group starts at 9am.  Wheel to wheel racing action starts at 10am when the trail class takes the course for a one hour grand prix finish race.  Following at 11:30pm, the UTV Class will race for one hour, followed by the Stock, and Modified Stock who will race for a two hour grand prix finish starting at 1pm.  The professional 4400 4×4 is scheduled to start at 3:15 for three hours with a grand prix finish at approximately 6:15pm.  All times are subject to change.  The winners of each class are determined by the most number of laps completed in the set amount of time.  The awards ceremony immediately follows the final race. Admission is $25 for a two day pass, $15 for adults, $5 for ages 8-15, children 7 and under free and Military with ID get $5 off.  At this particular event, there is also a Family Day pass for $30 that includes any two generations of immediate family.  There are vendors, food and amenities on site, and we encourage you to bring chairs and shade structures. There is camping available onsite.  For additional details go to http://www.werocklive.com/events/w-e-rock-west-round-2/. 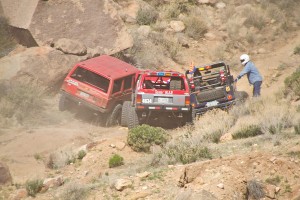 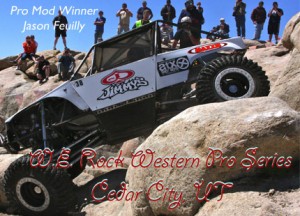 Last Year’s Experience at Cedar City…there wasn’t any Dirt Riot last year, but this is what the W.E. Rock Event looked like!   http://www.werocklive.com/2012/w-e-rock-western-series-round-2-cedar-city/ 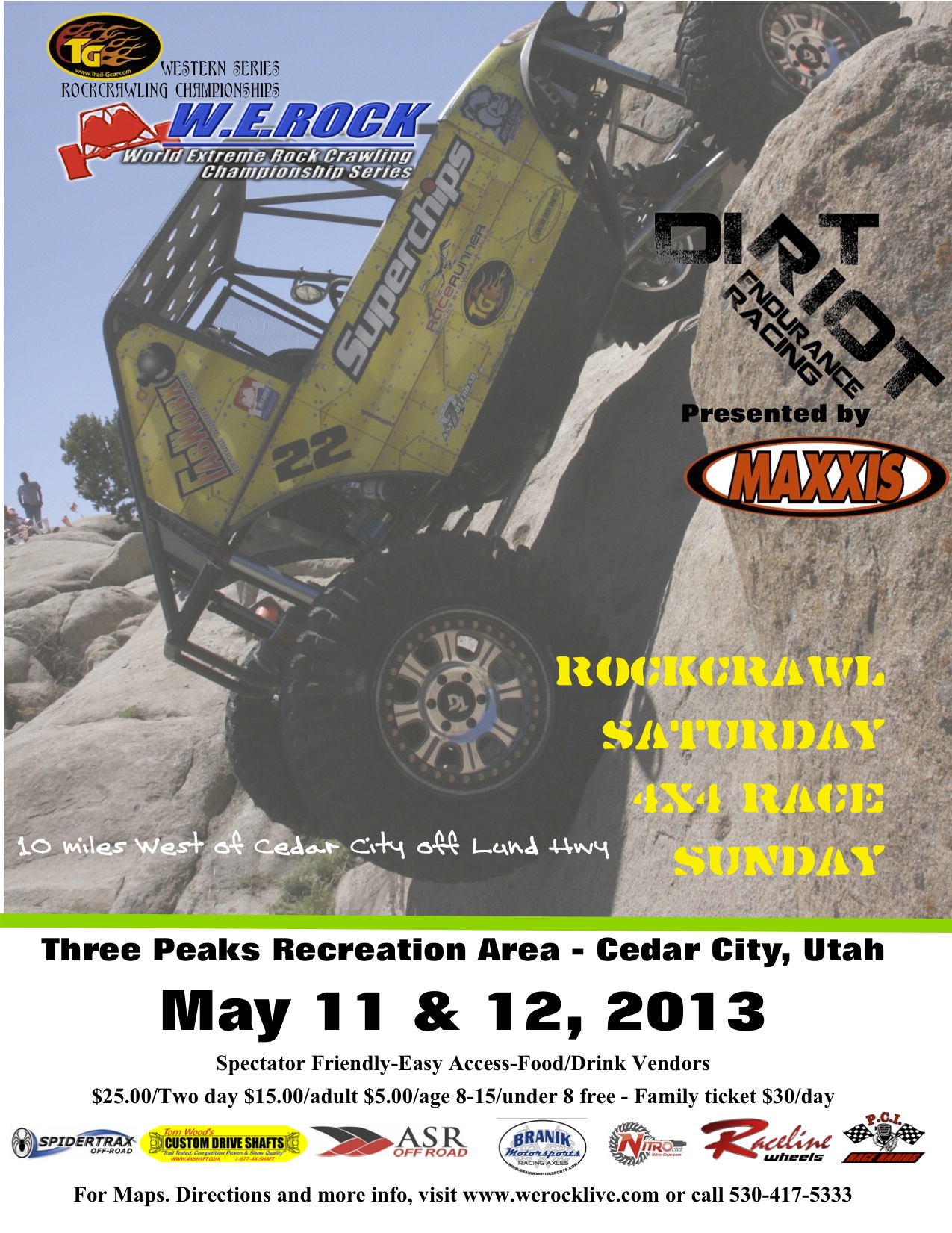 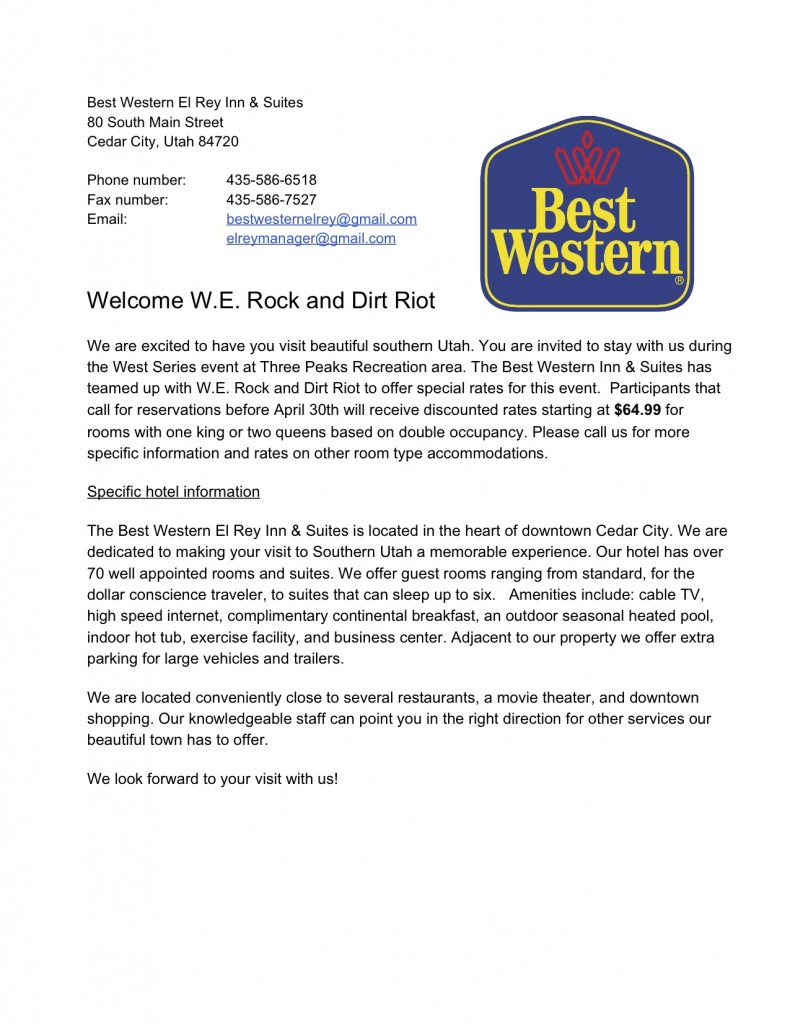